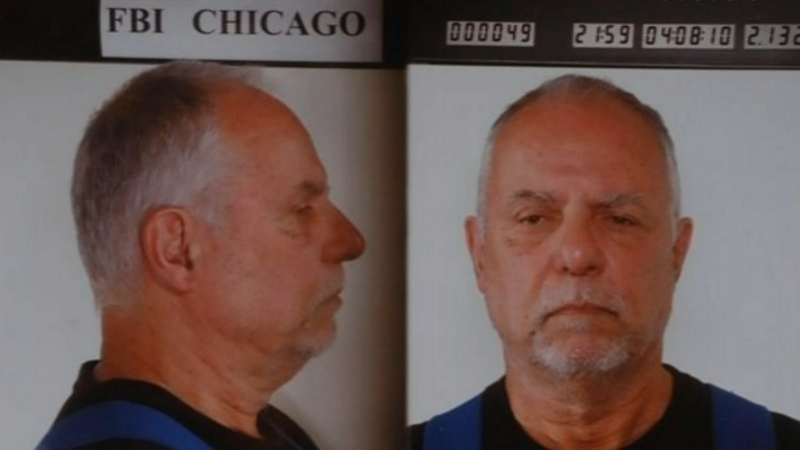 CHICAGO (WLS) -- One half of the Chicago Outfit's dynamic duo who led an infamous 1980 jewel heist just wants to retire to the warm weather and is asking a federal judge for early termination of his Chicago court supervision.

Joseph Jerome "Jerry" Scalise, a career mobster and accomplished thief, is renowned for stealing the 45 carat Marlborough diamond from a posh jewelry store in London, England on September 11, 1980.


Both Scalise and his partner in that crime, Art "the Genius" Rachel walked into the store as Arab sheikhs and walked out with loads of gemstones including the near million-dollar Marlborough.

ABC7's I-Team has been looking into the Marlborough diamond theft for nearly forty years - because the huge gemstone has never been found.

While the mob's jewel crime of the century didn't end well for Scalise and Rachel -- they were arrested at O'Hare Airport returning from London -- the diamond has never been found.

Both men did time for that crime in the UK and were recently freed from federal prison in the U.S. after serving sentences for other, unrelated burglary crimes.

Now Scalise, 82, is asking a judge to excuse him from the final component of his sentence from a 2010 armored car scheme. He wants the final six months of court supervision lopped off his term so that he can move to Arizona with a woman he now lives with in suburban Bloomingdale.

"Unfortunately, there is a reluctance to allowing Mr. Scalise to move to Arizona with he's while still on supervised release," said his attorney Vadim Glozman, in a newly filed court motion in Chicago. "Being that he is moving to a new retirement community with new neighbors and a chance to start a new life, having United States Probation Officers arriving in bulletproof vests and sidearms to conduct a safety check of the premises (should Mr. Scalise's supervised release simply be transferred) is not the first impressions she wants to make."


A hearing on the matter could be held later this week, Glozman told the ABC7 I-Team in an interview on Tuesday.

"I think there comes a time in everyone's life when they want to retire and move somewhere warm and I think that time is now for Mr. Scalise," Glozman said.

He notes that Mr. Scalise's friends have all died and that if he doesn't move with the woman to Arizona he will have nowhere to stay for the last months of his parole.

Even as the Marlborough man wants to ride into the sunset, he knows only too well what is left in the dust.

"While it would be remiss to ignore the mistakes he has made in his life, when it comes to the instant (latest) offense, Mr. Scalise has certainly paid his debts and displayed exemplary behavior while both incarcerated and since his release," Glozman said.

That, of course, was not the case for much of Scalise's life, which was dominated by burglaries and other Outfit exploits. However, the mobster sometimes known as "Monk" still possesses one of the greatest secrets of Chicago organized crime: what happened to the Marlborough diamond?

His cohort in that stick-up, Art "the Genius" Rachel, who clearly didn't live up to his mob nickname with the duo getting arrested 24 hours after it happened, has always been coy when discussing the caper.


In a 2001 sidewalk interview Rachel denied knowing what happened to the sparkler, telling the ABC7 I-Team he'd "already spent the money."

Mobologists have had many theories about the fate of the great Marlborough diamond: that the thieves mailed it to themselves or someone else, buried it in the U.K. on the way to the airport, or handed it off to an accomplice - who then cut it into a hundred small diamonds, making a large fortune.

Odds are that under the mob's code of silence Scalise and Rachel will take their diamond knowledge to the grave.