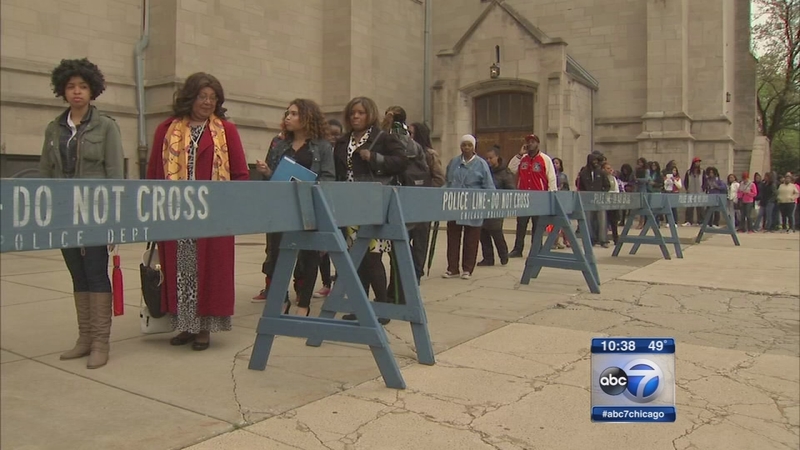 Auditions for Spike Lee?s ?Chiraq? on South Side

CHICAGO (WLS) -- Thousands lined up for the chance to take on a small role in Spike Lee's upcoming film about violence in Chicago. The movie has already gotten a lot of buzz thanks to its working title, "Chiraq."

Filming is slated to start in Chicago this summer and those auditioning Saturday for the film did not seem to mind the controversy swirling around the project.

With a musical accompaniment provided by St. Sabina Church, people lined up as early as 4:30 a.m. Saturday for a shot to appear in Lee's new film. The line stretched from the front door of St. Sabina Academy all around the parish block and then continued across the street.

"I'm an aspiring actress and I feel like this is a great opportunity for everyone here," said T'yanna Smith.

The casting call was simple. Hopefuls were given numbers, escorted in by groups for a photo and escorted out. The media was not allowed inside nor were any of the casting agents. Lee's production people were also not allowed to comment.

The film has been surrounded by controversy since Lee announced he wanted to explore violence on the streets of Chicago and use the title "Chiraq." Those in line had some mixed feelings.

"It's real life," said Jumaanee Rogers. "This is the life we live and this what we see. I'm here to support the controversial, but it's not really controversial to me because it's reality, this is the world we live in."

This past week, one South Side alderman wanted to block Lee's film by having the city stonewall a $3 million state tax break.

Despite the attention the film has garnered, not all in line were familiar with what the movie is about.

"I know it's called 'Chiraq' so I'm thinking it's about the violence, but I'm not for sure about that," said Leeosha Wallace.

This is the only casting call held for the film. A member of Lee's production team said the film will start shooting very soon at Chicago's Cinestage Studios.