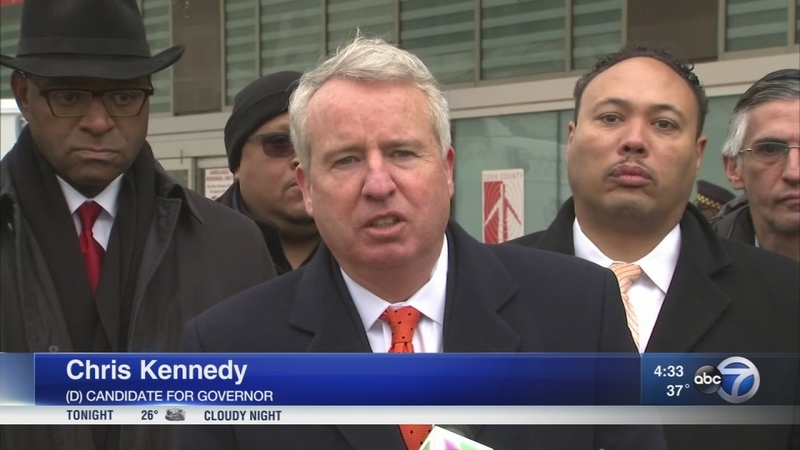 CHICAGO (WLS) -- Democratic candidate for governor Chris Kennedy stood outside Stroger Hospital Friday to call for change to deal with the violence that has once again pushed Chicago's homicides over 600 for 2017.

The focus is also on remembering the families who will mark the holidays with a real sense of sadness and loss.

They are the stark reminders of lives lost to gun violence: balloons and other memorabilia that make up the countless memorials that are part of the landscape in many neighborhoods around Chicago.

Kennedy and his running mate spread the blame around, calling out Gov. Rauner for not being in charge, and members of their own party, too, for not doing enough to stem the violence.

While fellow Democrat, billionaire JB Pritzker has made attacking Gov. Rauner his campaign focus, and Daniel Biss has targeted the wealth of his rivals as a key issue, Kennedy has made fighting violence the central theme of his campaign.

"It's not just the wounded who come here to Stroger Hospital, but it is the brothers and sisters, the family members, entire communities that suffer from urban post-traumatic stress disorder," said Kennedy.

To those who have lost loved ones to violence, the holidays are a reminder of the pain they deal with every single day.

Pam Bosley, who lost her son to gun violence outside a church eleven years ago, talked of the pain the holidays bring for those who have lost loved ones. She showed off the ornaments she will place on her son's grave for Christmas.

"January 5th he would have been thirty, that would have been a milestone for me, but instead, I'm here to tell you about my son Terrell Bosley who was shot and killed April 4, 2006 at the age of 18," Bosley said, her voice quivering with emotion.

She joined with calls to remember the victims not as simply statistics, but instead as real people with families who will mark the holiday with sadness, not joy.