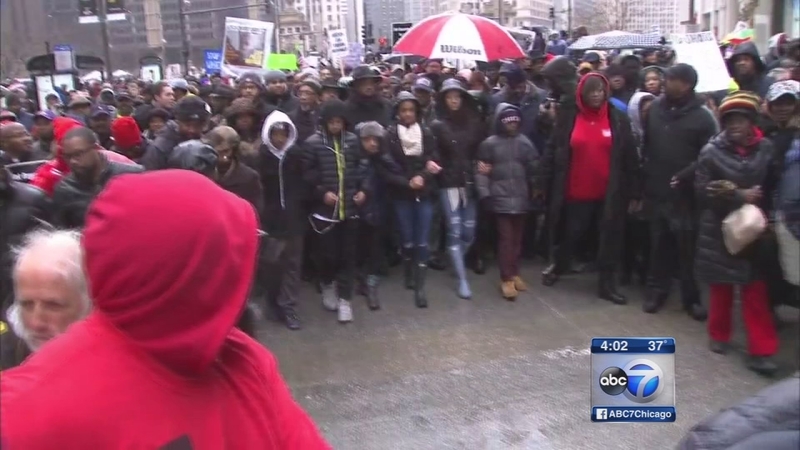 CHICAGO (WLS) -- A protest and march is planned for Christmas Eve, aiming to disrupt shopping on Michigan Avenue while calling for changes at City Hall.

Protesters are urging people to shop elsewhere as they try to get Mayor Rahm Emanuel's attention and ultimately force him to resign. Protesters held a "die-in" Tuesday night outside the office of Mayor Rahm Emanuel, then they left City Hall and marched downtown.

Demonstrations have been ongoing and unrelenting and as they continue the group calling for change has become more diverse.

Javier Ruiz, a college student studying journalism who was born and raised in Chicago's Pilsen neighborhood, says no matter what he's doing with is life police officers seem to see only one thing.

"Walking down the street, police assume that we had, like, guns stashed," Ruiz recalls. "He comes in here, calls for like three squad cars to come, interrogate us, look for evidence that is not there."

Ruiz says this harassment is his reality, as it is for his brother and friends, and results only in distrust for police for some in the Latino community.

"They don't trust the police. Whenever there are problems, the last thing they do is call the police," he says.

Ruiz is among a growing number of Chicago Latinos participating in protests calling for an end to police brutality and a change in city leadership.

"The city of Chicago deserves a mayor that respects the loss and values the life of our young people," says Omar Lopez of the Chicago Latino Coalition.

More Latino participation is expected in the march on Michigan Avenue as more college students are on winter vacation.

"We do want to stop people, if it be at all possible, from going in these stores. Why? Because it's better to bleed green than bleed red," says Rev. Gregory Livingston of Coalition for a New Chicago.

"We're trying to prevent any more situations of people not being able to enjoy their families, enjoy the holidays with their families, because they've been unjustly killed," says Carlos Perez of We Are America.

ABC7 reached out to one of the organizations that represents merchants on Michigan Avenue and they have not responded to a request for comment. The protesters are looking forward to the demonstration and say they understand the familial significance of the Christmas holiday but they say they are protesting in honor of all the people whose lives have been lost.