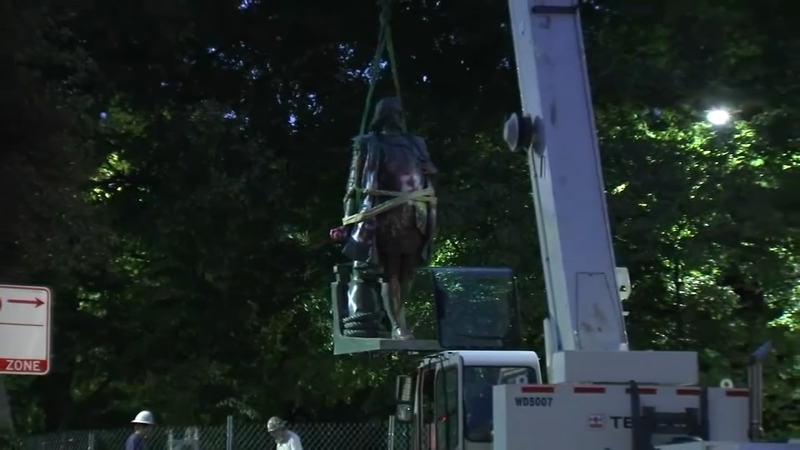 CHICAGO (WLS) -- An Italian American group is filing a lawsuit over the removal of a Christopher Columbus statue in Chicago.

It's been almost a year since the statue of Christopher Columbus was moved from Arrigo Park after civil unrest. Now a group wants it back.

The Joint Civic Committee of Italian Americans said Wednesday it filed a lawsuit against the Chicago Park District to return the statue.

"What happened to Italians and the Italian America community on July 24 at 3 a.m. could happen to any ethnic group, any community," said Ronald Onesti, JCCIA president.

The JCCIA filed a lawsuit against the Chicago Park District alleging it breached a nearly 50-year-old agreement that the statue at Arrigo Park wouldn't be taken down without the group's written approval.

"We are not asking for damages, an explanation or even an apology. We simply want the statues back where they belong, plain and simple," Onesti said.

The group argues Mayor Lori Lightfoot ordered the removal of three Columbus statues as a safety measure during protests. Group members believed the move was temporary, and want the statues put back.

The Joint Civic Committee of Italian Americans discusses a lawsuit calling for the return of a Columbus statue.

Anthony Tamez-Pochel is a member of the Chi-Nations Youth Council which is made up of Native American young people. Pochel help lead the demonstrations for the removal of the Columbus statues, and he says he wants them to stay down.

"These statues were not put up to specifically to honor Columbus the man or his accomplishments. They were put here to honor our parents and grandparents who help build this city," he said.

This Sunday, the JCCI plans to hold an Italian Unity Day at the park marking the one-year anniversary of the removal. They are calling for everyone in support of their cause to pack the park.

The city said it is reviewing the lawsuit. A spokesperson for Mayor Lightfoot issued a statement saying, ""The City's efforts throughout this process have not been about a single statue or mural, but about creating a formal process that will reflect our values and elevate our rich history and diversity. Over the past year, we have been purposeful in engaging residents, community organizations, and national experts to help guide the Chicago Monuments Project. The work will continue this summer with a series of in-person neighborhood programs. At the conclusion of this deliberative process, the City will release a report summarizing this engagement and the committee's recommendations. Ensuring that our city's symbols represent inclusivity and uplift the stories of Chicago remains paramount."