"We received some information that day that raised some very serious public safety concerns. I didn't want to wait."
WLS
By Craig Wall 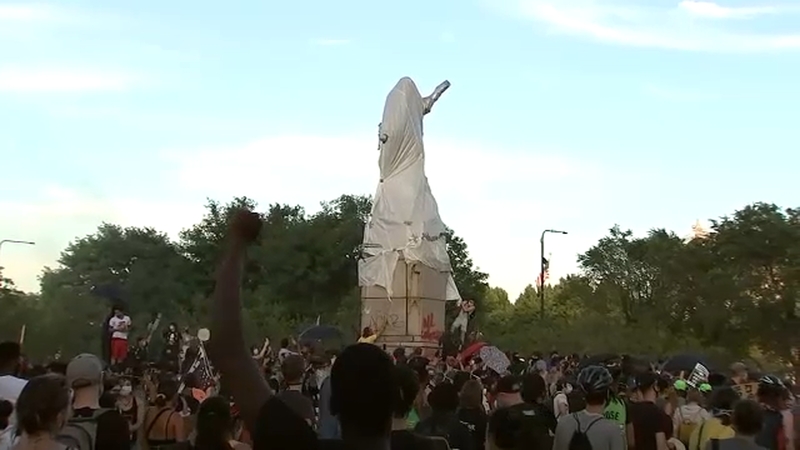 CHICAGO (WLS) -- Days after the overnight removal of two Chicago Christopher Columbus statues, Mayor Lori Lightfoot commented publicly for the first time since her controversial decision. She answered questions about why it had to be done so secretly, under the cover of darkness.

"I wanted to make sure that we did it as quickly as possible, and we received some information that day that raised some very serious public safety concerns. I didn't want to wait," she said.

The statues, which were removed from Grant Park and Little Italy, had been a point of contention in recent weeks, including one incident that left nearly 50 Chicago police officers injured.

When pushed for details, the mayor would only say that there was some intelligence that gave her great concern, but several police sources told ABC7 they were unaware of any intelligence about something bad that was going to happen if the statues had not been taken down.

The mayor also dismissed claims by some alderman that her decision simply appeased the protesters.

"This was about public safety," she said. "Anyone who saw the videotapes from a previous Friday night, which saw a peaceful protest high jacked by vigilantes who came there to hurt the police, but also other people got hurt in the ensuing chaos. This is about public safety, pure and simple."

The Police Superintendent David Brown said removing the statues took away a flashpoint for protesters and allowed police to redirect resources to prevent violence in neighborhoods.

He also credited having those extra officers available to help keep the shootings and murders down this past weekend.

"When we commit significant resources downtown when protests turn violent, that means the violence in the south side and west sides don't get the deployments that they deserve and need and want," Supt. Brown said.

The mayor has said the removal of the statues is temporary, but the co-founder of Black Lives Matter Chicago said if the statues are returned, protesters will too.