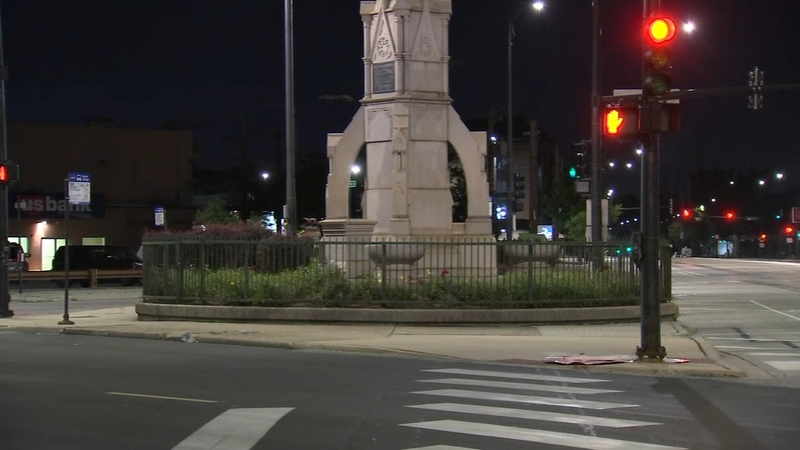 CHICAGO (WLS) -- A third statue of Christopher Columbus has been taken down in Chicago Friday morning.

This statue was located at Exchange and Chicago avenues in the South Chicago neighborhood.

Earlier this week, 15th Ward Alderman Susan Sadlowski Garza told the Sun-Times she has been talking to city officials about taking down the statue following the removal of the Columbus statues in Grant Park and Little Italy.

In a statement, the city said, "Following public safety concerns over planned demonstrations similar to the one in Grant Park two weeks ago, the City has temporarily relocated the Christopher Columbus statue at Drake Fountain in the South Chicago neighborhood until further notice. This temporary relocation is part of an effort to prevent individuals from pulling down statues in an extremely dangerous manner, which has created unsafe situations for protestors and police, as well as residents of the surrounding community.

"To ensure a safe process for residents to express their support or concerns over any of Chicago's monuments, memorials, and murals, the City will be announcing a formal framework to assess such works in partnership with our local communities."

Last week, Christopher Columbus statues in Grant Park and Arrigo Park in Little Italy were removed in the middle of the night on orders from Mayor Lori Lightfoot.

The mayor has said the removal of the statues is temporary, She defended the move citing public safety.

"I wanted to make sure that we did it as quickly as possible, and we received some information that day that raised some very serious public safety concerns. I didn't want to wait," she said.

The statues, which were removed from Grant Park and Little Italy, had been a point of contention in recent weeks, including one incident that left nearly 50 Chicago police officers injured.