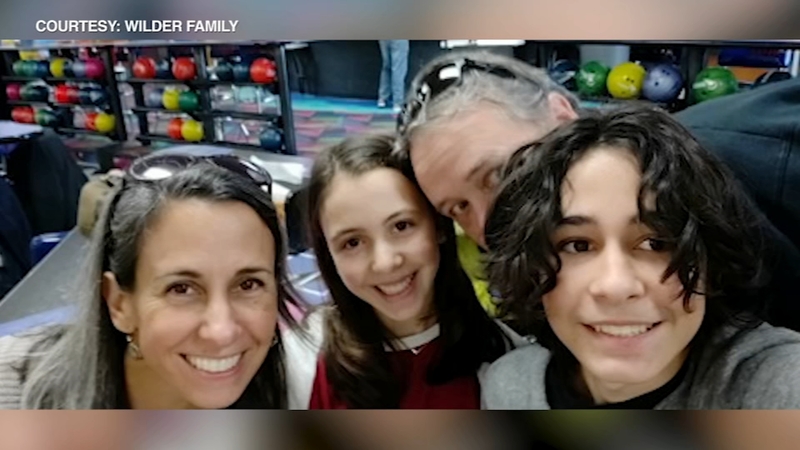 CHICAGO (WLS) -- The family of a 15-year-old Chicago boy wounded last week in a police shootout with a suspect in a suburban bank robbery has filed a lawsuit against the surviving suspect.

Wilder's parents, Tom Wilder and Lucia Morales, along with attorney Tim Cavanagh, said in a press conference Monday that they hope the legal action will help them learn more.

The couple described Rylan Wilder as a passionate musician, the youngest to play at local music festival Riot Fest with his band, and an honors student at Lane Tech. He has already undergone multiple surgeries and will likely require more.

"Throughout this whole experience, Rylan was talking, being so brave, and ... more concerned about others than he was about himself," Morales said. "The first thing that he said to me was 'Mom, is everyone else OK? I hope everyone else is OK.'"

Prosecutors accused Maurice Murphy, 32, of being behind the wheel waiting in the getaway car when police say his accomplice Christopher Willis was inside the Des Plaines Bank of America demanding money at gunpoint. Murphy was arrested in Des Plaines shortly after the robbery, but police say Willis escaped and stole a car.

Police said Willis, 32, carjacked a woman and then led authorities on a chase into Chicago's Old Irving Park neighborhood. A Des Plaines officer fatally shot Willis. He died from multiple gunshot wounds, according to the Cook County Medical Examiner's Office.

Rylan Wilder's parents said Monday they just wanted to get in touch with their son the night of the shootout.

"I had been texting Rylan, telling him, 'where are you? Daddy's trying to get there, he's having a hard time,'" Morales said.

She never heard back.

Instead, her husband called to say police would not let him near UpBeat Music School, where Rylan Wilder had just finished his intern shift. The next call Tom Wilder received was one telling him his son had been shot.

"No one can ever imagine what that's like to see their child on a table like that, the amount of doctors working on him, the amount of blood everywhere," Morales said. "I know people may think that an arm injury is nothing, that it's just a little bullet hole. I can tell you all ... that this whole part of his arm is pretty much gone."

In addition to the lawsuit against Murphy, Cavanagh said they plan to ask for all evidence from the agencies involved in the shooting.

Murphy was named because he knew or should have been aware that committing an armed bank robbery would lead to a large police response, endangering the general welfare of the public at large, and could prompt further acts of violence involving innocent bystanders, Cavanagh said in a news release. He went on to say the family has not ruled out adding either Chicago or Des Plaines police to the lawsuit, depending on what the evidence will show them if the judge grants their motion.

A Chicago police officer who was wounded in the shootout with Willis has been released from the hospital.