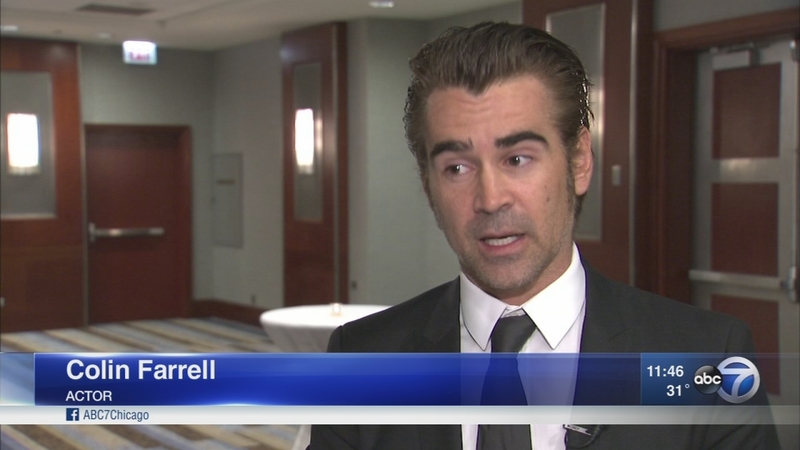 CHICAGO (WLS) -- Actor Colin Farrell was in Chicago Saturday night, not to promote his new movie, but for a fundraiser for a little-known condition called Angelman Syndrome, which his 13-year-old son has been diagnosed with.
The award-winning actor attended an event at the Chicago Hyatt Regency which raised money to battle the illness.

Farrell, whose latest film is "Fantastic beasts and where to find them," has been coming for years to the fundraiser.

Angelman Syndrome is a rare neuro-genetic disorder that affects one in 15,000. It's sometimes misdiagnosed as cerebral palsy or autism.

"There are about 7,000 rare disorders out there. it's hard to shine a light on each and everyone. But Angelman's Syndrome is getting a lot of attention now just because of what causes the disorder and how close we are to treating it and curing it," said Paula Evans, founder of the Foundation for Angleman Syndrome Therapeutics.

Families from all over the world came to Chicago for the event. Each had an opportunity to meet a number of celebrities connected somehow to the syndrome, including former Disney Channel star Josh Peck whose manager has a child with Angelman Syndrome.

"This is my first year. Getting to come to Chicago and meet the families and hear some of the science and hear how the disease is being treated ... it's really exciting and gives a lot of hope," Peck said.
Related topics:
societyloophealth
Copyright © 2022 WLS-TV. All Rights Reserved.
TOP STORIES
10 shot, 2 fatally, on Near North Side
13-year-old carjacking suspect critically injured in police shooting
City Council to take up ordinance on curfew changes
Marine veteran seriously injured in Irving Park hit-and-run
PGA Championship picks, predictions with ESPN Chicago's Randy Merkin
Teen shot and killed in vehicle on Far South Side ID'd by ME
Motorcyclist strikes, kills man crossing street on NW Side, police say
Show More
Celebrate National Streaming Day with Hulu for $1/month for 3 months
CTU votes for new president
Disney celebrates National Streaming Day with drone show over DTLA
City Council committee to vote on NW Side casino plan
Oakbrook Terrace fights back after red light camera permit revoked
More TOP STORIES News