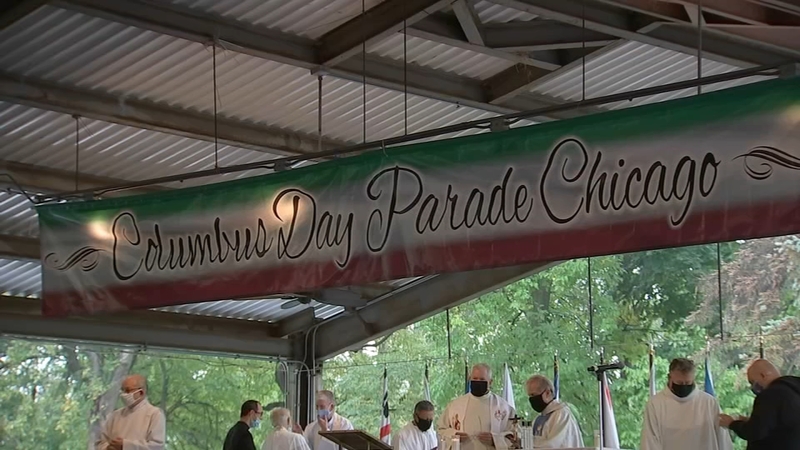 CHICAGO (WLS) -- Chicago's annual Columbus Day parade is not happening this year due to the pandemic, but one group held a rally Monday anyway and wants the statues of Christopher Columbus returned.

Hundreds gathered for a "Proud and Positive" rally at Arrigo Park, with the event being hosted by the Joint Civic Committee of Italian Americans Monday morning. The rally was followed by a car parade in Little Italy.

Several months ago, the city removed three Christopher Columbus statues, after large protests and riots erupted over his treatment of Indigenous people.

But some local Italian Americans say Columbus is a part of their history.

"There have been recent actions in an effort to replace Columbus Day with Indigenous Peoples Day," said Ron Onesti, vice president of the Joint Civic Committee of Italian Americans. "We welcome Indigenous people. We want you to have your day. We will march with you arm-in-arm, celebrate with you, mourn with you. We just do not believe the day that celebrates your culture needs to come with it a price tag and the expense of our federal holiday."

Just days ago the committee and delivered a letter to Mayor Lori Lightfoot's office requesting the return of the removed statues. Mayor Lightfoot said she is working with the Italian community on a resolution.

"[We] will make a range of recommendations, not just on a single statue, but on ways in which we can bet do a better job, reflecting Chicago's history," Lightfoot said earlier this week.

A group of Italian-Americans are rallying with calls to bring back the Christopher Columbus Statue in Grant Park.