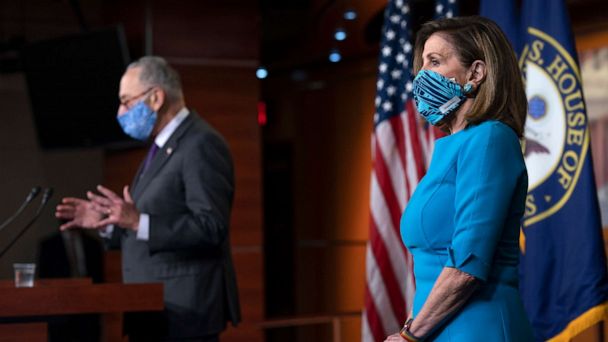 Congress will head home for a week-long Thanksgiving holiday recess without passing any sort of compromise coronavirus relief bill as the U.S. death toll passes 250,000 and millions of Americans remain on unemployment.

But there is some hope that renewed talks could see some sort of coronavirus relief aid in the coming weeks even with little time remaining on the legislative calendar before the end of the year.

Democratic and Republican leaders had previously shot down the idea of combining the massive omnibus spending bill with any sort of coronavirus relief - saying the two issues need to be dealt with separately - but as the pandemic rages on with stark numbers of those infected and dying, and millions of people without employment and economic relief, this could be lawmakers' last chance at getting legislation that addresses both spending matters across the finish line before the end of the year.

"Last night, they've agreed to sit down and the staffs are going to sit down today or tomorrow to try to begin to see if we can get a real good COVID relief bill," Schumer told reporters Thursday in New York. "So there's been a little bit of a breakthrough in that McConnell's folks are finally sitting down and talking to us."

Schumer and Pelosi are scheduled to meet with President-elect Joe Biden Friday in Wilmington, Delaware. Earlier this week, Biden called on Congress to immediately pass a relief package.

Republican aides told ABC News that discussions between staffers Thursday were strictly about passing the omnibus spending bill - which would fund the government through next year - and were unrelated to any additional coronavirus relief.

The back and forth comes amid concerns about the toll of the coronavirus on the U.S. economy as crucial pandemic relief programs are due to shut down by the end of the year.

Pandemic Emergency Unemployment Compensation, which provides an additional 13 weeks of unemployment insurance and the Pandemic Unemployment Assistance Program, which aids self-employed or part-time workers, are set to expire Dec. 31.

The nationwide eviction moratorium will expire at the end of the year, as well as the student loan forbearance program, which President Donald Trump implemented by executive order.

The Paycheck Protection Program to assist small business owners stopped taking applications in August. And the boosted $600 in federal unemployment insurance ran out in late July.

"The COVID-19 pandemic and economic recession will not end without our help. It is essential that this bill have sufficient funding and delivers meaningful relief to the many Americans who are suffering. For the sake of the country, we ask that you come to the table and work with us to produce an agreement that meets America's needs in this critical time," Pelosi and Schumer wrote in a letter addressed to McConnell earlier in the week, urging the Republican leader to meet them at the negotiating table.

Congress remains at a standstill on a relief package, as Democrats are calling for more than $2 trillion in new relief money, whereas Republicans in the Senate have set their sights on a much lower $500 billion figure.

"To sum it up, I'm open to a targeted bill, roughly of the amount that we recommended - a half a trillion dollars which is not nothing - narrowly targeted at schools, and health care providers, at PPP, and of course liability reform, to keep America from being engaged in an epidemic of losses on the heels of the pandemic. Very open to that. But I've seen no evidence yet as several of my colleagues have suggested that they're open to it," McConnell told reporters during his weekly press conference Tuesday.

Despite the stalemate, there has been no shortage of finger-pointing among congressional leaders.

"Speaker Pelosi and the Democratic leader have been equally consistent and they don't think Congress should do anything at all anything unless they get to cash out a far left ideological wish list," McConnell said this week.

"Speaker Pelosi's approach that nothing is better than something is wrong. And everybody knows it, and the American people have paid the price for it. And now democrats are clamoring to go home for the rest of the year. That's a disgrace," McCarthy said.

"There's one road block. There's one big wall that has stopped this the entire time. It is Speaker Pelosi," McCarthy said. "It would be very helpful though if we could have Speaker Pelosi to stop the political games. I mean, how could she send people home?"

Meanwhile, Democrats in the House have passed two massive relief packages that Republicans in the Senate have refused to take up: a $3 trillion-plus package passed in May, and a slightly watered down version at $2.2 trillion passed in October.

McConnell and Senate Republicans have proposed a $500 billion targeted bill that would mainly focus on extending unemployment benefits, liability protections and bolstering the Paycheck Protection Program, which aids small businesses.