Construction worker killed when 45-ton beam falls along I-90 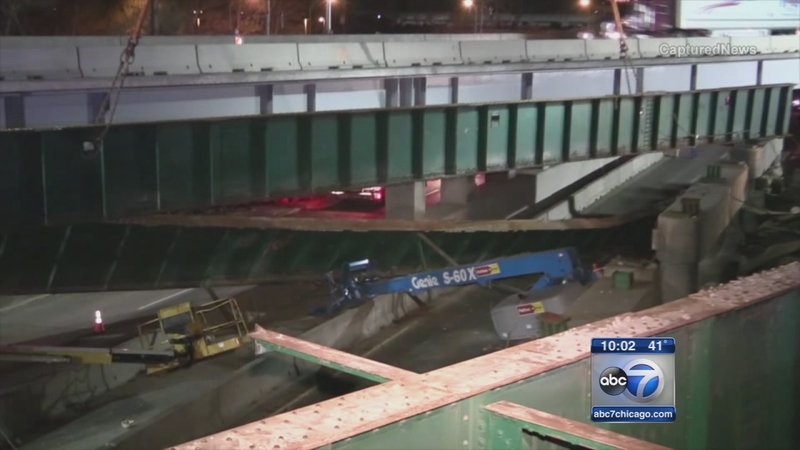 Construction worker killed when 45-ton beam falls along I-90

Sources identified the victim as Vicente Santoyo, 47, of Berwyn. He would have turned 48 next week.

Investigators with the Occupational Safety and Health Administration said crews were removing large beams from the site early Tuesday morning. While cutting steel bracing between two beams in half around 2:50 a.m., investigators said the load rolled off a pier support and came down on the crews.

"They were moving some steel across the roadway. Apparently the load shifted, the girder came down," Des Plaines Police Chief Bill Kushner said.

All 45 tons - nearly 101,000 pounds - came crashing down onto a lift where Des Plaines police say Santoyo was working with a team to help cut the beam. His wife and four children were asleep in their Berwyn home when it happened.

"Today around 5:30 in the morning she called me and she told me that she was going to be unable to come to work because her husband had an accident," said Maria Hernandez, a neighbor who works with the victim's wife. "She said that the doctors said he didn't suffer because the beam came to his chest and he passed away right away."

"He was a good guy, he was a family guy. He did everything for his family, especially for his kids," said Francisco Cervantes, a neighbor.

OSHA said preliminary reports suggest a strap or chain that was supposed to support the beam may have failed.

"These types of incidents are preventable if the employer is following all OSHA standards and regulations. We can help prevent workplace fatalities if these standards are followed," OSHA spokesperson Scott Allen said.

The other three workers suffered minor injuries and were taken to Lutheran General or Northwest Community Hospital in Arlington Heights for treatment.

Touhy was reopened around 10:30 p.m. Tuesday after it was shut down between Wolf and Lee all day.

Two lanes of eastbound I-90 are also blocked in that area. To get around the closure, drivers should take Oakton, Howard Avenue or Algonquin Road to go east-west. They should not take Higgins Road, since it turns into Touhy.

"If you're driving anywhere to the northwest suburbs please allow extra time. We have message boards and detour signs placed throughout the area trying to divert people away from this scene," Chief Kushner said.

OSHA said in 2014, 4,251 workers were killed in the private industry. One in five of those deaths were in construction. Falls were the leading cause, followed by electrocution, beings struck by an object and getting caught in between objects.