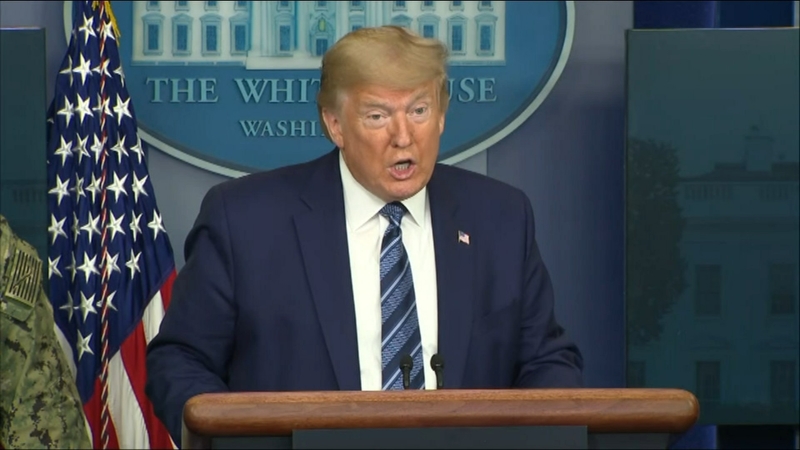 CHICAGO (WLS) -- Illinois will need thousands of ventilators from the federal government as it prepares for the state's peak in coronavirus cases expected late April, Gov. JB Pritzker said.

Pres. Trump criticized Pritzker during the briefing, accusing the governor of "complaining all the time."

President Donald Trump addresses testing and ventilator shortages during a White House briefing on coronavirus in the U.S. Sunday.

"We're building a 2,500 bed hospital in McCormick place. That's the big convention center in Chicago. And we're helping to staff it and probably will end up staffing it because he's not able to do what you're supposed to be able to do as a governor," President Trump said on Sunday. "He has not performed well."

"I express myself in the way that I do. I get a lot angrier at moments with people who aren't helping at the federal level. I've tried to hold it in check," Gov Pritzker said. "I'm not somebody who likes to express anger in that way but I have, unfortunately during this process, been quite angry and I will fight for the people of Illinois."

Illinois officials sent a strong signal to the public Sunday, wearing masks for the first time during the daily COVID-19 briefing.

The number of coronavirus cases in Illinois surpassed 11,000, including 274 deaths, over the weekend.

Earlier Sunday, the Grundy County coroner's office reported the death of Stateville inmate Ronald Rice. The 66-year-old died at Morris Hospital in Morris, but no other details about his death are known at this time.

State officials sent a strong signal to the public Sunday, wearing masks for the first time during the daily COVID-19 briefing.

"I've been wearing a mask when I go out," Gov. Pritzker said. "I did this morning when I was out and I did it, you know, as I came here. People should wear a mask."

Gov. JB Pritzker wears a mask to his daily briefing on Illinois' COVID-19 cases on April 5.

Pritzker focused most of his prepared remarks on child care for essential workers, saying they now qualify for the state's Child Care Assistance Program.

"The state will cover most, if not all, of the cost of care without emergency child care providers," Pritzker said. "That includes everyone from nurses and doctors to support staff in hospitals, to grocery store clerks and food producers."

The governor is encouraging child care centers that have closed to reopen to help families of essential workers.

"We will be paying enhanced reimbursement rates for emergency child care, effective April 1, of 30%," he said. "Above the rates that we usually pay to reflect the additional costs of providing care in smaller groups."

For more information on the child care assistance offered, visit the state's Department of Human Services website as well as https://coronavirus.illinois.gov.

The Illinois Department of Public Health released statistics Sunday that show that in Chicago, black residents make up 68% of the fatalities and white residents account for 11%.

The governor said it represents a large problem.

"So, we already started out with an unequal system of health care for people," Pritzker said. "And then it gets massively exacerbated when you bring on something like COVID-19, which clearly requires an enormous amount of health care provision. So I'm deeply concerned about this. I've seen these stats."