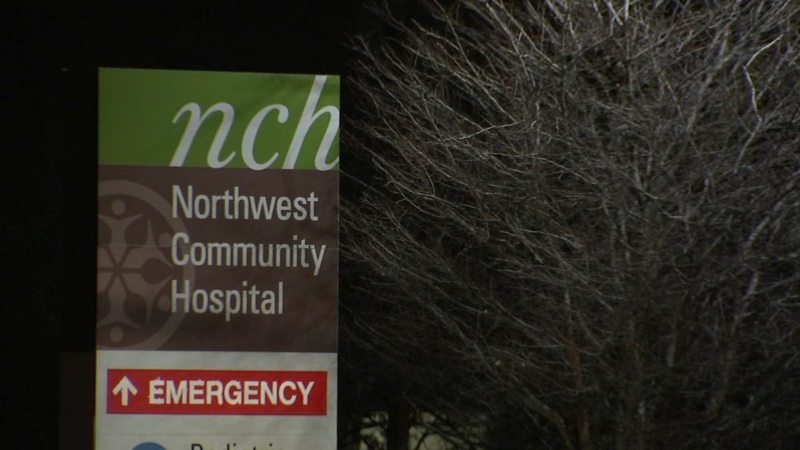 ARLINGTON HEIGHTS, Ill. (WLS) -- Illinois health officials have announced Monday that a fourth person in the state has tested positive for novel coronavirus.

Officials said the fourth case is a woman in her 70s who is the wife of the man, also in his 70s, who is the third case of COVID-19. The "presumptive positive" test still needs to be confirmed by the CDC.

The third patient in Illinois to test positive for the COVID-19 novel coronavirus is being treated at a hospital in Arlington Heights, officials said Monday. Health officials said the woman who is the fourth case is quarantined at home and complying with health officials. Both the man and woman are in good condition.

It is not clear how the man became infected. An emergency command center is now operating inside Northwest Community Hospital.

"Public health officials are on-site at the hospital to identify all the potential close contacts of the third and fourth cases," said Dr. Ngozi Ezike, director of the Illinois Department of Public Health. "We are using every tool at our disposal to contain... we are still in containment mode."

Ezike said it is very possible additional COVID-19 cases will be found as voluntary testing increases around the state, but again insisted the risk to the general public remains low. She reiterated that people should take the same common sense precautions used against the flu to prevent the spread of the virus.

A healthcare worker said hospital staff told her to stay home from work because she might have come in contact with the patient sick with COVID-19.

Health care workers are working to track down people who may have come into contact with the patient, including hospital staff.

The healthcare worker said Northwest Community sent her a text message telling her she was placed on temporary work restrictions because she may have come in contact with a patient who is sick with the virus.

A Chicago husband and wife became the first two cases of COVID-19 in Illinois. The woman traveled to Wuhan, China and her husband later became sick. Both were treated at St. Alexius Medical Center in Hoffman Estates and later released to home monitoring.

Health officials said they have made a full recovery.

the Inspired Home Show, one of Chicago's biggest conventions, has been canceled this year due to COVID-19 concerns.

"For the last several weeks, we have been watching this situation very carefully, with our primary concern being the safety and well-being of the home + housewares industry," said Derek Miller, IHA president. "The IHA Board of Directors made this decision after consulting with industry constituents including exhibitors and retailers. In the end, the global nature of our event, combined with the worldwide concern regarding the coronavirus outbreak and ongoing travel restrictions make it impossible for us to hold The Inspired Home Show next week."

The International Housewares Association previously announced the International Sourcing Expo would not open this year due to travel restrictions between China and the U.S.

We got our first look at one of four facilities in Illinois that will be testing for COVID-19.

Governor JB Pritzker and other state health officials gave an update on Illinois' efforts to identify and isolate cases of COVID-19.

Pritzker said he was on a conference call with other governors and Vice President Mike Pence, who promised federal resources for state efforts to stop the spread of the virus.

The media also got their first look at one of four Illinois testing facilities now preparing for an influx of sample as concerns about the spread of the virus grow.

"We are ready to put the weight of the state behind a full-fledged response when needed, and if we meet those thresholds," Prtizker said.

"We are using every tool and every resource at our disposal to contain the spread of this virus," said Ezike. "We are still in containment mode."

Officials said 286 people in the state are actively being monitored twice a day for possible symptoms. They are also urging anyone with flu-like symptoms to be voluntarily tested.

Officials said they're also taking proactive measures, asking patients who test negative for the flu to be tested for COVID-19.

"This is an aggressive strategy to go out and be looking to see if there's community transmission or not," Ezike said.

Researchers at Northwestern Medicine are leading a national team of scientists investigating the structure of COVID-19, and announced findings Monday suggesting drugs that had previously been developed to treat Severe Acute Respiratory Syndrome (SARS) could be newly developed as effective drugs against the new coronavirus.

"These are drugs that actually block the ability of the virus to, once it's in a cell, to replicate and create more viruses," said Professor Karla Satchel, Northwestern Medicine.

Governor Pritzker said he is reaching out to CEOs of Illinois' largest health insurance companies to ensure patients have access to affordable testing and treatment.

The state is also working to draft guidelines for nursing homes and other facilities that treat vulnerable populations.

Some students and staff are staying home in Arlington Heights Monday as a precaution after they may have been exposed to a patient with coronavirus.

Meanwhile, some students and staff in Arlington Heights School District 25 are staying home as a precaution after they may have been exposed to the patient.

RELATED: Coronavirus: Symptoms, prevention, and how to prepare for a COVID-19 outbreak in the US

The district's superintendent said she is being proactive, notifying students and staff after several people that work and attend schools in the district may have been exposed to somebody related to a hospital worker that was exposed to a patient with COVID-19.

The superintendent said she was notified Sunday night that two staff members and their children were contacted by a babysitter.

A member of the babysitter's family is a hospital employee that was exposed to a patient diagnosed with coronavirus.

Those employees and students will stay home and self-monitor their symptoms, although at this point, none of them are displaying symptoms.

The superintendent said she is working directly with the Cook County Department of Public Health and the Village of Arlington Heights for any next steps.

Students studying abroad in Europe are being called back home as the number of cases of novel coronavirus there continue to rise.

Connor Lang and his girlfriend Jacqueline Estey have seem some of the highlights of Europe during their first month of what was supposed to be three months of study abroad, but the semester has come to a sudden halt thanks to COVID-19.

"It kinda hurts," said Lang. "We had trips planned we can't get our money back for, and places I wanted to see."

Lang is from Naperville, Estey is from Western Springs, and both are students at the University of Kansas, which sent about 20 students to study in Florence, Italy, this semester. The school sent an email to students over the weekend telling them to come home due to the outbreak of new coronavirus cases in the country.

Officials have declared a level three alert, which advises to avoid all non-essential travel.

Lang's parents canceled their plans to visit in April, and booked him a flight home immediately.

"I was disappointed," he said. "This was something we'd been planning for many months. It is a once in a lifetime experience."

Lang said he's not especially concerned about catching the virus, but other students said they're taking no chances.

"People are leaving as fast as they can," Lang said.

The students in Huntley High School's travel club are in the same boat; they were mean to spend part of their spring break in Italy, but after the new warning their travel company canceled that plan. They are hoping to rebook them somewhere else, where COVID-19 is not an issue.

"For us, safety is our biggest thing to stand on, especially when we're sending kids halfway around the world," said Huntley Principal Marcus Belin.

Click here for full coverage of coronavirus from ABC7Chicago

AIRLINES WAIVE CHANGE FEES FOR INTERNATIONAL TRAVEL DUE TO COVID-19

A number of American airlines have announced they will waive travel fees for international travel due to the COVID-19 outbreak.

Delta announced Monday they will waive fees for all flights booked between March 1 and March 31 to any international destination they serve, allowing "customers to make a one-time change to their itinerary without incurring a fee."

JetBlue: Delaying its summer seasonal service between JFK and Venice. The service was previously scheduled to begin April 1, but will now start on May 1.