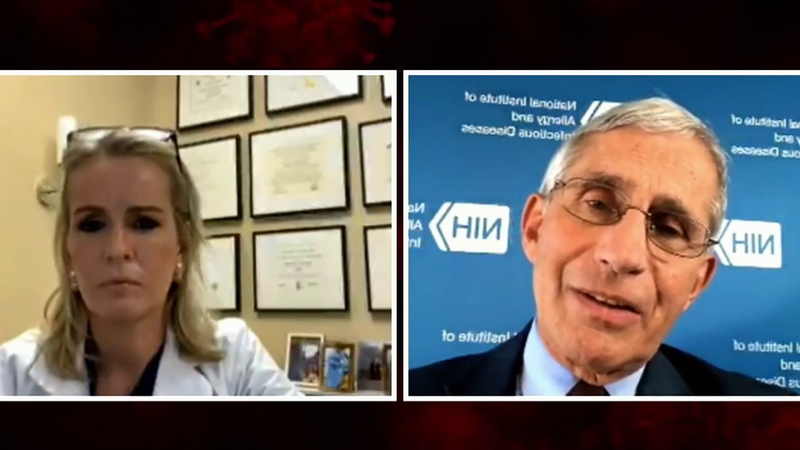 NEW YORK -- Several states including Ohio, Tennessee, Kentucky and Indiana need to get the virus under control or risk watching their transmission rates get out of control, warned Dr. Anthony Fauci, the nation's top infectious disease expert.

In an interview livestreamed on ABC News' Instagram on Wednesday, Fauci said he and Dr. Deborah Birx -- the White House coordinator on the coronavirus task force -- delivered the warning to the states' governors in a private phone call on Tuesday.

He said Ohio, Tennessee, Kentucky and Indiana are among those states starting to show a subtle increase in "percent positives" -- the percentage of total tests with positive results.

That's "a surefire hint that you may be getting into the same sort of trouble with those states that the southern states got into trouble with," he told Dr. Jennifer Ashton, ABC News' chief medical correspondent.

Fauci said he and Birx "made the point" in the call with governors that these states need to take push residents to wear masks, avoid crowds, avoid the bars and wash hands.

"If we do that, hopefully we'll prevent multiple other states from becoming just like the southern states," he said.

Fauci's warning comes after case counts were on the rise this summer, particularly in places like Texas, Florida and Arizona. The U.S. death count on Wednesday hit 150,000, according to a count by Johns Hopkins University.

In his interview, Fauci said Asian and European countries have done better to get transmission rates under control in part because they were so firm in shutting down this spring. Fauci has estimated that only about half of the U.S. stayed home, allowing the virus to continue infecting people at exponential rates and overwhelming many hospitals, particularly across the South.
The current U.S. rate of 50,000 to 60,000 a day is "still not optimal," he said.

On schools, Fauci -- whose daughter is a teacher -- reiterated his position that everything possible should be done to reopen schools but that doing so might not be realistic in areas where the virus is raging.

"I don't think there's gonna be a one-size-fits-all here," he said. "I think we got to be careful with the main thought being, we want to try as best as possible to get the children back to school."

When asked about his own fitness regimen, Fauci, who turns 80 this December, said he still likes to run despite a work schedule that goes well into the night. He said he typically gets up at 5 a.m. every morning, grabs juice or eggs and will drink two "very strong" double espressos as he tackles his email.

He says he often works well into the night.