Mayor Lori Lightfoot and Dr. Allison Arwady gave an update Friday morning on how vaccine distribution is going in Chicago.

Lightfoot and the Chicago Department of Public Health announced significant improvement in the percentage of vaccine administered to Chicagoans of color. These improvements are the result of the work the city has been doing with many community partners, including through the Racial Equity Rapid Response Team (RERRT) and its Protect Chicago Plus initiative.

"Over the past month, we have doubled down on our efforts to not only drive vaccines into communities that need them most but ensure that our vaccination rates match the demographics of our city," Lightfoot said.

The city's Protect Chicago Plus initiative has targeted neighborhoods hardest hit by COVID-19 to help close the vaccine's racial gap. Starting Monday the Homan Square Community Center will be a five-day-a-week vaccination site for all North Lawndale residents, regardless of Phase 1B eligibility. Only 7% of North Lawndale residents had gotten a first dose, well below the 10% citywide average and half the rate of neighborhoods like Lakeview.

"This is the city's effort to really reach out and to decrease barriers to accessing the vaccine," said Dr. Wayne Detmer, Lawndale Christian Health Center.

"Logistics matter, we have to be intentional we have to be thoughtful and at the same time be fast," said Dr. Amish Desai, Oak Street Health Medical Director South Side Region.

Cumulative data since the start of the vaccine rollout shows the race/ethnicity of individuals who have received a first dose in Chicago is: Latinx 18.1%; Black, non-Latinx 19.1%; White, non-Latinx 40.8%; Asian, non-Latinx 6.7; other, non-Latinx 3.6%; Unknown 11.8%, according to the city.

University of Chicago Medical Ethicist Dr. Will Parker says there should have been more equity restraints built in to group 1A by narrowing the group to people with direct contact with COVID patients, while prioritizing communities with high COVID rates at the same time.

Additional information can be found at Chicago.gov/covidvax.

Lightfoot also got her second dose of the vaccine Friday at the Gage Park site.

Chicago city leaders gave an update about COVID-19 vaccine distribution Friday morning, as the weather continues to cause delayed deliveries from the federal government.

The Pfizer vaccine comes from Kentucky, according to city leaders. Since that vaccine needs ultra-cold storage, Chicago's health department and hospitals generally handle the vaccine. Moderna's vaccine is shipped from Tennessee to Chicago, and city health officials said those shipments did not arrive Monday, Tuesday or Wednesday.

The Illinois Department of Public Health was expecting 365,000 doses from the federal government this week. The department confirmed it received 55,000.

The state said it is in contact with the Centers for Disease Control and Prevention and other federal agencies to understand the logistical challenges of shipping the vaccine during inclement weather. Illinois officials also asked if there is anything the state can do to speed up the process.

Delays of Moderna vaccine shipments to Chicago caused appointments for shots at clinics across the city to be canceled or postponed.

On Friday, 400 appointments have been scheduled and some may have been canceled.
"We're going to send out about 200 text messages with emails and a voicemail, alerting people but also giving them a link to rebook next week, so to me, just do the right thing, and we'll roll with it," said Dr. Rahul Khare, with Innovative Express Care.

Over 2.1 million doses of vaccine have been delivered to providers in Illinois, including Chicago. An additional 445,000 doses were allocated to federal government partners for long-term care facilities.

State public health officials said vaccine distribution numbers are reported in real time and those numbers lag by as much as 72 hours. 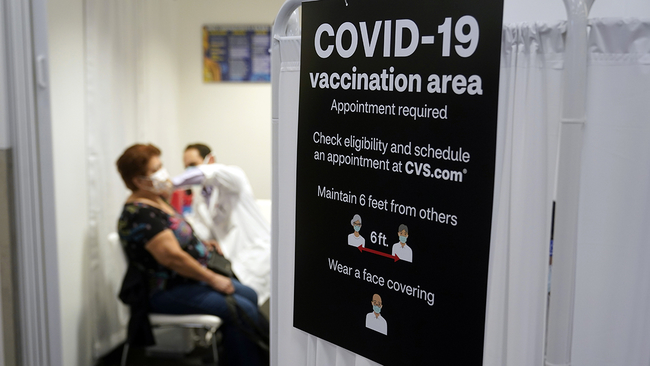