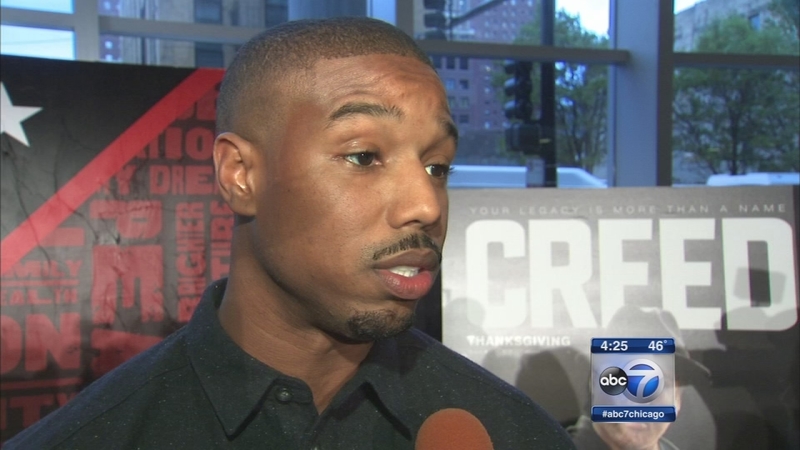 CHICAGO (WLS) -- "Rocky" is the Oscar-winning movie that turned Sylvester Stallone into a star. Now, his character passes the torch to a new fighter in "Creed." Eyewitness News reporter Janet Davies talks to the actors and director who are getting great reviews for this new chapter of the Rocky saga that opens Wednesday.

Adonis is Apollo Creed's son, but the heavyweight champion died before he was born. He's now an aspiring fighter, and wants Rocky Balboa to train him. His father's toughest opponent and loyal friend will help Adonis find out if he's a champ.

"It was an honor. That guy created this world 40 years ago, way before I was born. I never thought and dreamed I'd be able to act across the screen from Stallone," said Michael B. Jordan, actor.

ABC7's Janet Davies asks: "Did you find that out shooting especially in crowds, that people really thought he was Rocky?"

"Oh for sure, I sometimes call him Rocky. It's so hard because you've known him playing this role for such a long time you kind of forget its two different people, but yeah the fans do the same thing," Jordan said.

"We'd often call him and ask him his advice and if he saw something he thought would help he'd always offer it up it was definitely a two way street and I wouldn't have had it any other way," said Ryan Coogler, director.

"I really think that we did justice to that story while bringing something fresh... I also think for a new generation that isn't familiar with Rocky. They might watch this movie and go back and watch the originals because they'll just be so interested in the world that the film occupies," said Tessa Thompson, actress.

"I think it's a good balance between old school and new school, two different worlds coming together and it works. Sometimes opposites attract and you find something you were looking for in an unlikely place. I think the same thing happens for Sly and Adonis," Jordan said.