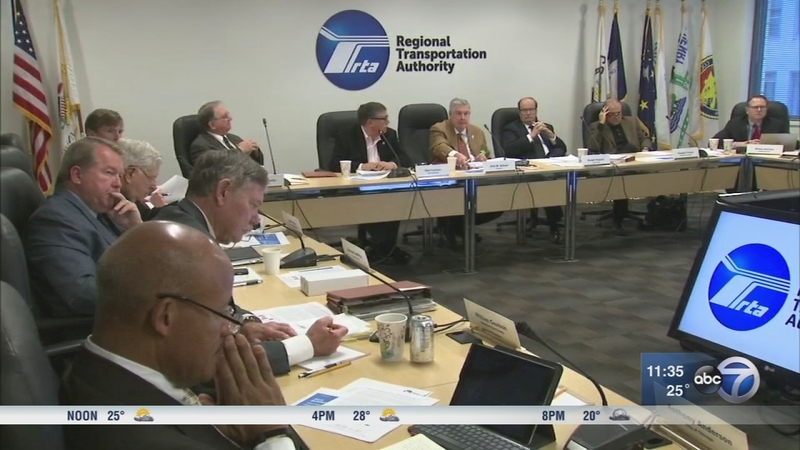 CHICAGO (WLS) -- Most CTA, Metra and Pace riders will soon be paying more after the Regional Transportation Authority's Board of Directors approved fare hikes and a 2018 budget on Thursday.

It's been nine years since all three transportation services approved fare increases in the same budget year.

Executive Director of the RTA, Leanne Redden, said approving the increases was the only option amid state budget cuts amounting to $100 million and a lagging state economy.

Although there will be plenty of push back from regular riders, Redden said even with the increases, the price of tickets is still a good value.

"We're sort of in the middle of the pack, or even lower in some cases, than some of the major transit systems in the country. So, I think we remain a good value," Redden said.

The CTA increased fares on Wednesday as part of its 2018 budget.

The increases come as part of an effort to fill a $33 million budget hole, caused in large part by a drop in state funding. Ride share services, such as Uber and Lyft, have also affected the CTA, which has seen a decrease in ridership in recent years. The Civic Federation, a fiscal watchdog group, opposes the budget. The group said the budget relies on unrealistic expectations and short-term borrowing to make ends meet, in addition to the fare hikes.

Metra riders will have to pay 25 cents more for each Metra ride come next February. It will be the fourth fare increase in four years and one of six fare increases in the last seven years.

The Metra deficit may grow to $20 million or more by the end of year, due to monumental maintenance costs for an aging fleet, reduced state subsidies and lower sales tax revenue.

For commuters it means:
- reduction in the 10-ride ticket discount
- increase in monthly passes of 4.1 to 8.4 percent depending on zone
- 25-percent increase in the weekend pass from $8 to $10
- bump-up in reduced fare rates

Moreover, 11 scheduled trains will be curtailed or eliminated on the North Central Service, Southwest Service and the Rock Island Line.

Scheduled maintenance will be cut back next year by $12 million to balance the budget, which will only exacerbate Metra's challenges.

Board members said Friday afternoon there is only so much cutting that they can do. Unless there is a new funding formula from Springfield, there is a chance there will be another increase about halfway through 2018.