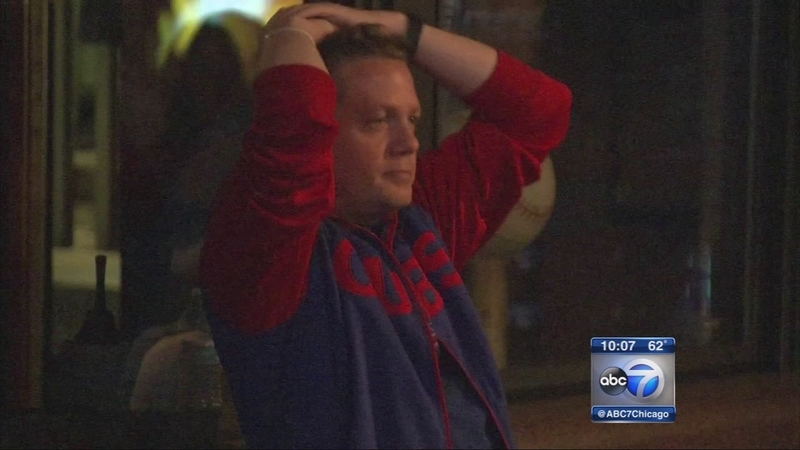 CHICAGO (WLS) -- The Los Angeles Dodgers shut out the Chicago Cubs 6-0 in game three of the National League Championship Series, and took a 2-1 series lead.

In Chicago, 2,000 miles away from Dodger stadium, Wrigleyville was teeming with nervous energy.

Early in the game fans were wringing their hands as the Dodgers drew first blood. But fans also held out hope, and reminded themselves this was only game three.

"I think it's looking a little sketchy for the Cubs. But we still have hope," said fan Tiana Belanger.

Fan also feared the team is overthinking it.

"I guess a little bit of nerves. They sounded confident in the interview, but they're not seeming so confident right now," said fan David Novak.

After winning a big league high 103 games during the regular season and sparking belief they could win the World Series for the first time since 1908, the Cubs have been shut out in consecutive games for the first time this year, managing just six hits - five of them singles.

Julio Urias starts Game 4 for the Dodgers on Wednesday and at 20 years, 68 days will become the youngest starting pitcher in postseason history. John Lackey starts for the Cubs.

Hill was acquired from Oakland along with Josh Reddick at the Aug. 1 trade deadline. The 36-year-old left-hander struggled with a blister on the middle finger of his pitching hand that landed him on the disabled list from mid-July to late August. The blister still bothered him in the final weeks of the regular season, and Dodgers manager Dave Roberts pulled him after seven perfect innings against Miami on Sept. 11.

Hill was strong from the start against one of his former teams, retiring the side to open the game and later eight in a row. He's given up one run in 23 innings over four home starts for the Dodgers, lowering his ERA to 0.39.

Rookie Corey Seager put the Dodgers ahead with an RBI single in the third, ending an 0-for-15 slide with runners in scoring position in postseason play.

Grandal was 0 for 5 with three strikeouts against Arrieta in his career before he launched a 3-2 pitch into the right-field pavilion in the fourth for a 3-0 lead. Grandal drove in Josh Reddick, who singled and stole second and third.

Justin Turner homered on the first pitch leading off the sixth to chase Arrieta, who dominated the Dodgers in his last previous two starts against them, including a no-hitter at Dodger Stadium in August 2015.

104-YEAR-OLD CUBS FAN HOPES THIS WLL BE THE YEAR

At 104 years old, Mary Ethridge remember going to her favorite Cubs game like it was yesterday.

At 104 years old, Mary Ethridge remembers going to her favorite Cubs game like it was yesterday.

"I take the Addison bus all the way to where the high school is, and then I get off there and then I'd watch the Cubs," Ethridge said.

Her room at the Clare Oak Nursing home is decked out in Cubs ear, ready for the big series. And Mary is always ready to show off her prized memorabilia: A ball signed by Billie Williams and a bat signed by Ron Santo. But what she loves to talk about the most is how she fell in love with the game, going on Ladies Day - a pioneering marketing concept to encourage more women and families to go to the ball park.

"My husband would wait for supper and he never got to eat until I got home," she said.

Supper could wait, much like Mary has waited for the cubs to win another World Series. She turns 105 in November and wouldn't that be a nice birthday present?

"I have been telling her for the last five years, she would say she was ready to go, I'm tired. I'd say, no mom, you're waiting for the Cubs to win another World Series. She said, 'I sure hope so,'" said her daughter Janet Zegler.

WATCH: CHICAGO SYMPHONY ORCHESTRA PERFORMS 'TAKE ME OUT TO THE BALLGAME'


"It's going to be a little different feel, but at the same time, for the most part, it's just about the same lineup," he said. "You try to tackle them accordingly. Use some knowledge that I have from the past to kind of help me tomorrow. But it's just another game on a big stage."
The mound is a place Arrieta feels comfortable. He complemented the Dodgers ground crew for creating a consistent surface that gives him confidence in his positioning and footing.

"When you've been in these situations before, it makes it a lot easier just to kind of take that deep breath, focus on your execution and go from there," he said.

Hill follows Clayton Kershaw as the second straight left-hander to start for the Dodgers in the NLCS, and he draws inspiration from the three-time Cy Young Award winner.

"He's got the stuff, right? You can't argue that," Hill said. "But then there's another level of that competitiveness that comes out where if you're on the other side and you're down on one knee, he's going to put you away. That's something that when I see that, you just never quit, you never give up, you continue to attack."

Hill had a 2.12 ERA during the regular season allowed a combined five runs in seven innings starting Game 2 of the NL Division Series against Washington and returning on short rest in the decisive Game 5.
Now, Hill returns on regular rest and manager Dave Roberts said the finger blisters that have bothered the left-hander this season are not an issue.

"With Richie, it's an inning-by-inning thing, so we'll just keep our fingers crossed," Roberts said. "Because all things being equal, the blister holds, I really, really like our chances."

Hill hasn't thrown more than 93 pitches since being acquired from Oakland in August. The blisters have affected how often he starts and how long he pitches.

The Dodgers will have to find a way to beat the Cubs without Kershaw, who has worked overtime in these playoffs and isn't expected to be available for the next three games in Los Angeles.