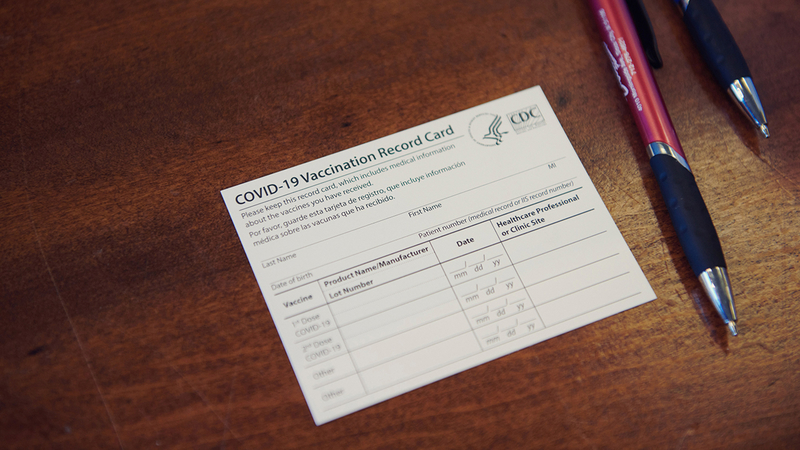 LONG ISLAND, New York -- A CVS employee in New York is facing charges after police say he was found in possession of fraudulent vaccine cards.

The arrest happened around 10:40 p.m. Tuesday on Long Island where police on a drug trafficking investigation spotted a man sitting in a gray Mazda with the engine running.

The man, identified as 21-year-old Zachary Honig, exited the vehicle when officers approached.

Police said after they asked him for ID, officers spotted brass knuckles in the car when he opened the passenger side door.

Inside the vehicle, they also found a controlled substance and 62 COVID-19 vaccination record cards.

They said eight of them were filled out with batch numbers, store numbers and dates that shot were to be administered, with only the name section left blank. Fifty-four others were totally blank.

Some were dated for last week, while others were dated 30 days ahead.

Police said Honing stole the vaccination cards from a CVS where he worked. CVS said they are terminating his employment.

CVS issued the following statement, "Following his arrest, we took immediate steps to terminate his employment as his alleged activity conflicts with our values, our policies and our commitment to safe, secure vaccination protocols."

Authorities said Honig planned to share them with family and friends. According to court documents, he admitted, "I sell them to kids so they can go to school."

"His intent was to share them with family members and friends that they can go into venues and possibly even use them at school when they go back in September," Nassau County Police Commissioner Patrick Ryder said. "You can't have scams like this occurring. The idea of getting us all back to normal is that when you walk into a place and they're requiring that card, you want to make sure that card is factual."

"Medical professionals and public health officials (are) going to use that card to make determinations on how to plan to reduce the likelihood of transmission of the virus, so you may be getting by the system, but ultimately it's adversely affecting the entire community," Harper said.