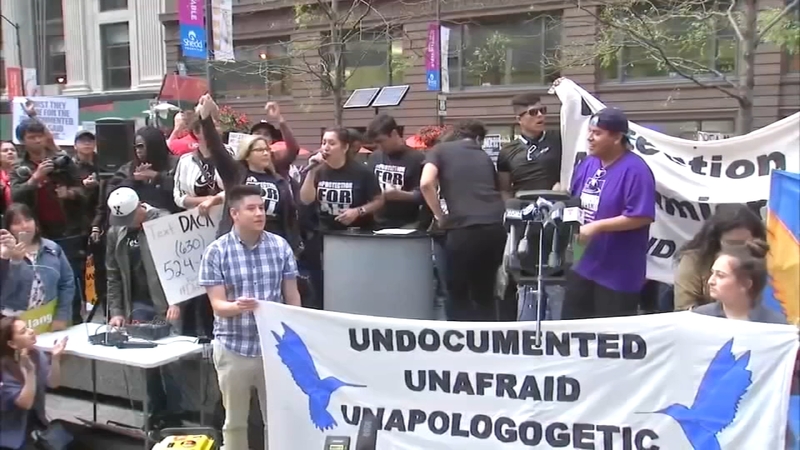 CHICAGO (WLS) -- Hundreds of thousands of young undocumented immigrants, knowns as "Dreamers," now face a new hurdle in their efforts to build thier lives in America as the Trump Administration shakes up a program aimed at protecting those who came to the U.S. as children.

Just a little more than a month after the Supreme Court ruled that the administration's attempt to kill the DACA program was not done properly, the Department of Homeland Security has said it will, for now, reject all pending and new applications to the program

"We knew that it was temporary because it left the door open to exactly this kind of action," said Vanessa Esparza-Lopez with the National Immigrant Justice Center.

In a memo released Tuesday, the acting Secretary of Homeland Security Chad Wolf said, "In accordance with the Supreme Court's decision, I am determined to give careful consideration to whether the DACA policy should be maintained, rescinded, or modified. In the meantime, given my serious concerns about the policy, I have determined that some changes should immediately be made."

"They are definitely defying what the Supreme Court ruled," said Fred Tsao with the Illinois Coalition of Immigrant and Refugee Rights. "They had to go back to the way it was before they tried to kill the program."

In addition to rejecting all new DACA applications, the administration has indicated existing applicants will have to renew their status every year, rather than every two years. That worries recipient Karla Robles, who along with her two brothers, arrived in the United States as a young child.

"I'm beginning my second year as a high school teacher and tennis coach, and it has been an incredible opportunity," Robles said.

When President Trump signaled his intent to kill the program back in 2017, he called on Congress to come up with a permanent solution; however, until now, there hasn't been the political will to do so.

"The Onus is now clearly on the Senate to bring HR6 the Dream and Promise Act to the floor for a vote. It's been languishing there for over 6 months now," said Representative Chuy Garcia (D- Illinois).