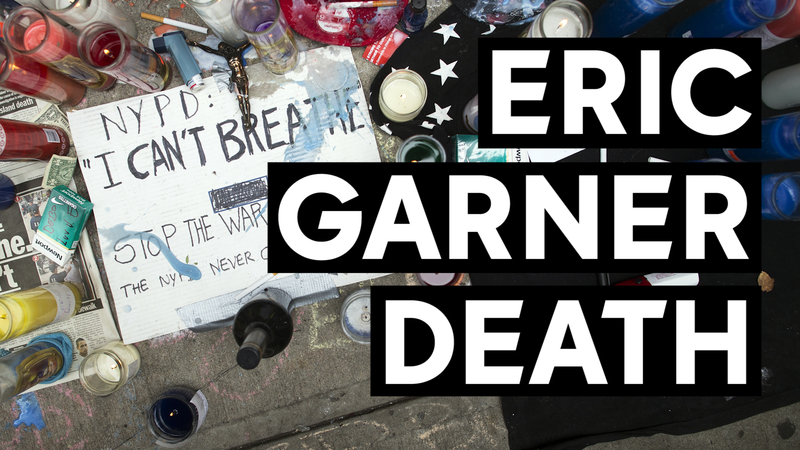 NEW YORK -- The Justice Department has declined to file federal civil rights charges against the NYPD officer involved in the chokehold death of Eric Garner, whose dying words "I can't breathe" became a national rallying cry for demonstrations about police treatment of minorities.

Federal prosecutors in Brooklyn informed the family of the decision not to charge Officer Daniel Pantaleo Tuesday, one day shy of the five-year anniversary of Garner's death and the deadline for the statute of limitations to file federal charges.

Officers were attempting to arrest Garner on charges he sold loose, untaxed cigarettes outside a Staten Island convenience store. He refused to be handcuffed, and officers took him down.

Garner is heard on bystander video crying out "I can't breathe" at least 11 times before he falls unconscious. He later died.

Eric Garner's mother, Gwen Carr, spoke out after the meeting with the federal prosecutor.

"The DOJ has failed us," she said. "The streets of New York City are not safe with them walking around. Five years ago, it was me. It was my family. Today or tomorrow, it could be your family. You're New York City residents. You're not infallible. You must remember that."
EMBED More News Videos

The Rev. Al Sharpton called the decision "a moral disgrace" and "judicial malpractice." He says the decision shows that people's federal civil rights are not protected "no matter what the evidence is."

A senior Justice Department official briefed reporters on the decision, framing the move as the result of a vigorously debated legal process with clear differences in legal opinion between the department's Civil Rights Division and the U.S. Attorney's office in the Eastern District of New York.

The final decision, the official said, was made by Attorney General Bill Barr -- who took the Eastern District of New York's recommendation not to prosecute over the DOJ civil rights division's recommendation to move forward with a prosecution.

"This should not have ended with the death of a person, but that's a very different question than what's presented to a prosecutor when deciding under the Justice manual whether a person should be indicted," the official said. "You can't watch the video and not feel great sympathy towards Eric Garner but then I think you have to impose a rigorous legal examination of the facts."

The official said that much of the legal analysis was based around whether Officer Pantaleo had a "willful state of mind" when he engaged in the chokehold that killed Garner.

"It was a very dynamic situation so to establish willful intent you'd have to try and have the jury... establish that in the middle of that event -- that in the officer's mind he made a conscious decision that I'm going to apply that type of hold," the official said. "We could not find that (Pantaleo) had that clarity of mind."

The official said that once the department had determined that it could not establish the willful intent requirement, it did not seek to analyze elements like whether Pantaleo's actions were not permissible or even reasonable under NYPD or other law enforcement policies. The official also acknowledged that the legal analysis surrounding Pantaleo's actions would have been different had he been a civilian that had engaged in a chokehold against Garner.

Chokeholds are banned under police policy, though Pantaleo has maintained he used a legal takedown maneuver called a "seatbelt."

The NYPD brought Pantaleo up on departmental charges earlier this year, and federal prosecutors were observing the proceedings.

He could face dismissal, but Police Commissioner James O'Neill has the final say on Pantaleo's fate in the department. But he will not make a decision until the police administrative judge who oversaw the disciplinary trial renders her verdict.

A spokeswoman for Mayor Bill de Blasio said O'Neill is expected to decide by August 31 whether Panteleo will be fired. The mayor also released a statement which said in part, "New York City is not the same city it was five years ago. We are a different city, and we must act like a different city. Moving forward, we will not wait for the federal government to commence our own disciplinary proceedings."

A state grand jury cleared Pantaleo of criminal conduct in 2014.

Protesters filled the streets of Harlem Tuesday night to denounce the decision not to bring civil rights charges against Pantaleo.