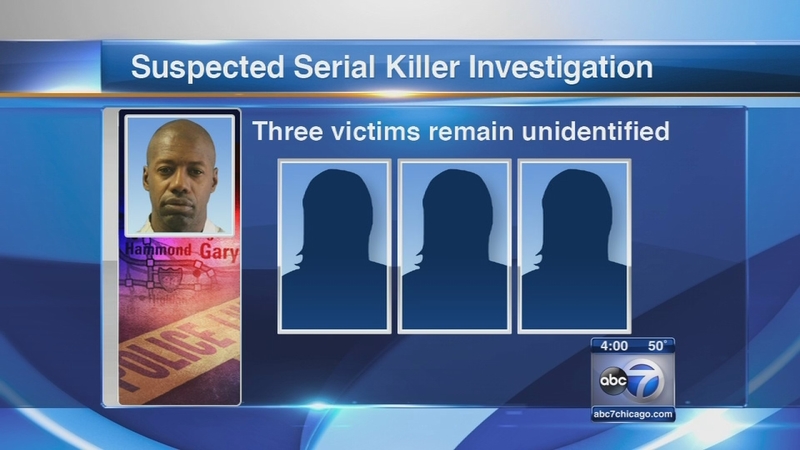 GARY, Ind. (WLS) -- The Lake County Coroner is asking for help in identifying two women believed to have been victims of alleged serial killer Darren Deon Vann. Vann is being held in isolation at Lake County Jail in Crown Point, Ind.

Darren Deon Vann, the alleged serial killer who confessed to the deaths of at least seven women in northwest Indiana, was transferred to Lake County Jail in Crown Point, Ind.

He was medically cleared and is under 24 hour surveillance, officials said. Vann is being kept in isolation away from the regular jail population. He is scheduled to be arraigned Wednesday morning at a courtroom within the Lake County Jail.

Vann was charged in the murder of Afrikka Hardy, 19, who was found strangled in a Hammond motel room Friday night.

The discovery of her body led to Vann's arrest and confession in six other murders, police said. There could be more victims.

"We're getting calls from all over, all over the country from relatives of missing individuals wanting information," Lake County Sheriff John Buncich said. Sheriff Buncich said he's referring callers to Gary and Hammond police departments.

"It's big. A lot of coordination here," he said.

On Tuesday, Gary Police Department detectives with cadaver dogs are searching abandoned homes, where six of the bodies were found over the weekend. Investigators also searched Vann's home overnight.

"I have dispatched a team of officers along with a cadaver dog to the Glen Park and Mid-town sections of the city," Gary Police Chief Larry McKinley said. "The purpose of the search is to ensure that the structures are completely vacant, get them boarded up and place them on the list for demolition."

Nearly 30 police officers and 15 recruits searched dozens of abandoned houses in Gary on Tuesday. But there are thousands of abandoned homes in the city. Police said they have nothing specifically suggesting there's another body in the area.

"No, we're just looking. The last three were found in this area. That's why we're concentrating on this area," Gary Police Lt. Thomas Pawlak said.

Hardy's body was the first to be discovered and led officials to Vann. Following his arrest, he took police to six other crime scenes, mostly abandoned homes in Gary, where he said he had dumped the bodies.

"He was very specific on the locations, very specific about what transpired at each location and how they were concealed," Gary Police Det. Cpl. Edward Gonzalez said.

Three of those six bodies have been identified as Anith Jones, 35; Teaira Batey, 28; and Kristine Williams, 36. The other three bodies remain Jane Does. Charges are pending the full autopsy results in those six cases.

Lake County Coroner Merrilee D. Frey is asking for help in identifying two of the women whose bodies were found in Gary.

The woman whose body was found in the 400-block of 43rd Avenue was wearing a silver colored link bracelet with "Best Aunt" on it. She also had two rings- both silver, one heart shaped and the other with scalloped engravings. She was about 5'3".

The other woman, found in the 4300-block of Massachusetts, was about 5'0" tall and wearing size 3/4 RUE21 jeans with white Nike gym shoes.

All seven women found appear to have been killed in the last seven months. According to statements from Vann, he may have started killing up to 20 years ago.