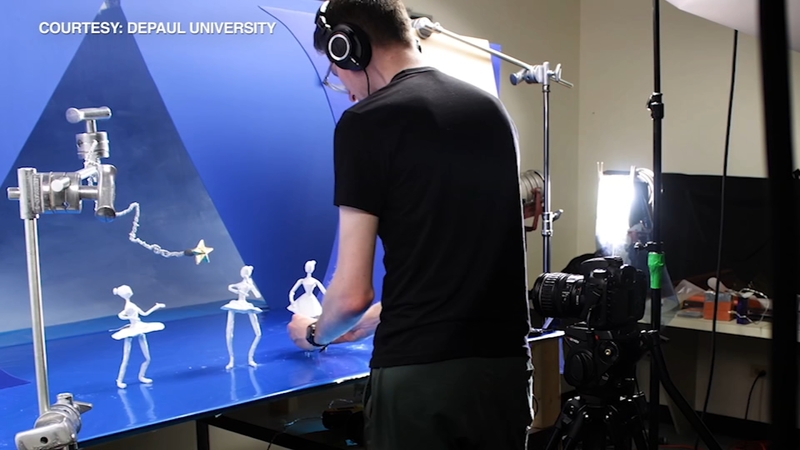 CHICAGO (WLS) -- A group of animation students at DePaul University have unveiled a stop-motion short film that will run as a window display for the school's Loop campus on State Street throughout the holiday season.

"It's been Christmas for us for the last year," said Meghann Artes, animation professor at DePaul.

"No, but it feels like we have all these packages under the tree and they've been there for a year. And we finally get to open them," Artes said.

More than 30 students worked on the film, from storyboarding to fabrication, animation, camera work and color correction.

"Everything you see in the film was made by student," said Artes.

The project came together through DePaul's Idea Realization Lab, a resource available to the entire DePaul Community.

"We're one of DePaul's maker spaces here in the Loop campus," said Thomas Newsome, lab manager. "A whole bunch of cool stuff happens here, ranging from building custom wheelchairs for students during Halloween to creating cool Christmas sets during the holiday season and everything."

The lab provides machines, tools and materials at no cost, as well as offering workshops to teach people how to use the equipment. The lab's goal is to educate people in areas they may not be exposed to in their everyday life.

"You give them something like this and this is where they soar, right?" Artes said. "And so it showcases the amount of talent we have here at DePaul."

"It's so time-consuming and painstaking, but it's actually worth it," Bell said. "When you see animation, on a screen, that you made, to this day I'll just giggle. I'll be like, "Hahaha, it's alive.' And that magic, you can't get it any other way."