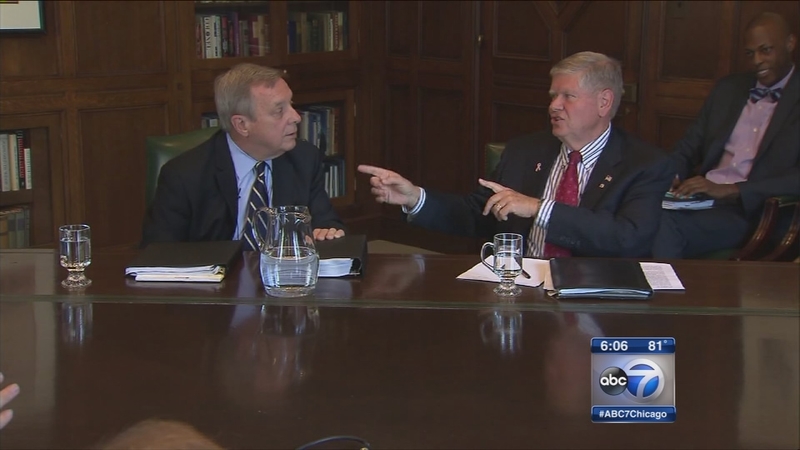 CHICAGO (WLS) -- Tax returns and residency take center stage in a face-to-face meeting in the race for the U.S. Senate race in Illinois. Both Democratic incumbent Dick Durbin and Republican challenger Jim Oberweis appeared before the editorial board of the Chicago Tribune.

Durbin demanded proof that the Republican is an Illinois income tax payer. Oberweis' wife lives in, and takes a homestead exemption in, the couple's Florida house, making her a permanent resident there. The candidate says he still lives in Kane County.

Later, Oberweis would not guarantee he'd make his state return public, but insisted he does pay Illinois income taxes.

Both candidates were smiling when they entered the board room. Durbin repeated his call for a minimum wage increase, "So that people who get up every single day and go to work are treated with dignity."

Oberweis said the Illinois middle class is worse off after three decades of Durbin in either the U.S. House or Senate:

"I think that 32 years is too long for anyone to serve," he said.

The Republican produced what he said was a transcript of an e-mail Durbin allegedly sent to the IRS trying to intimidate a conservative political action committee.

"Certainly the use of the IRS to intimidate political opponents was wrong. When Richard Nixon thought about doing it and its wrong when you do it Senator Durbin," Oberweis said.

"What he brought up today was news to me. I'd not heard any reference to any e-mail between the IRS and our office," Durbin countered.

"Off year elections we see a drop off of one and a half million votes in Illinois," Durbin said. "We're working now to bring those votes out because they're largely democratic votes."