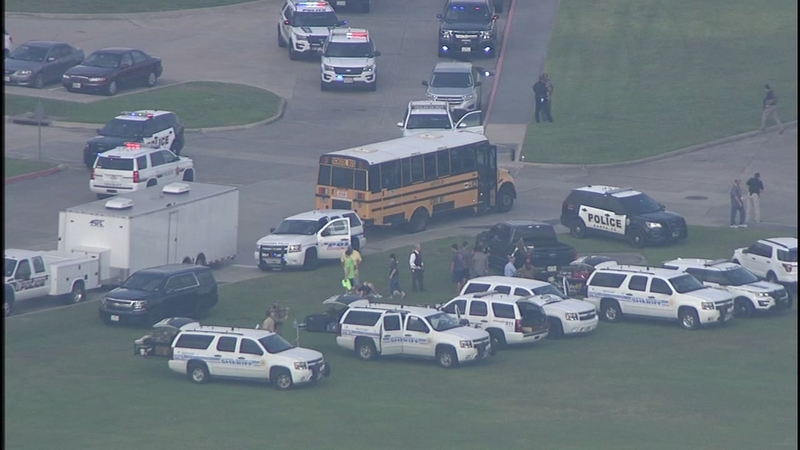 During a press conference Monday at Santa Fe ISD's administration building, Galveston County Sheriff Henry Trochesset revealed more about the timeline between the moment the shooter opened fire and when and how long officers engaged the suspect.

The sheriff says it took four minutes for police to get to the suspect. #SantaFeShooting

Trochesset said it took four minutes for Santa Fe ISD officers to begin engaging with the suspect on Friday.

By the end of the shooting, the suspect was trapped in a room and police were in a hallway.

The sheriff says the officer who was suppressing the shooter gave responding officers time to evacuate students, and get the suspect in custody.

In all, the sheriff says 200 law enforcement officers rushed to the school Friday to assist school district police. Police say the entire incident lasted about 25 minutes.
Dimitrios Pagourtzis is being held in the Galveston County Jail on suicide watch.

Trochesset also answered questions about whether the 10 killed and 13 injured might have been shot in the crossfire between the shooter and police.

"From what I see, I don't believe any of the individuals that were killed were from law enforcement," Trochesset said. "And I can't give you that full until the autopsy."

The gunman who opened fire inside Santa Fe High School Friday morning allegedly repeated "another one bites the dust" during the carnage, one survivor said.

"He was playing music, making jokes, had slogans and rhymes he kept saying," student Trenton Beazely said of the suspect on "Good Morning America." "Every time he'd kill someone he'd say, 'another one bites the dust.'"
Eight students and two teachers were shot and killed when 17-year-old Dimitrios Pagourtzis allegedly burst into an art room with a shotgun and a .38-caliber revolver, both of which appear to be legally owned by his father. Thirteen others were wounded.

The gunman who opened fire inside Santa Fe High School Friday morning allegedly repeated "another one bites the dust" during the carnage, one survivor said.

Beazely first heard a singular "boom" that morning in art class, he said, which he figured was a textbook falling to the floor. Then he heard two more "booms," after which "everyone just started taking off running," he added.

Beazely broke into a room where they stored kilns but the gunman found them.

"I could see him running, gun pointed at the door," he said.

As his adrenaline raced, Beazely said, he helped wrap wounds for a victim. It wasn't until after police rescued them that he realized he had been shot.

Another student, Rome Shubert, scaled a 7-foot wall as he fled during the shooting, initially not realizing he had been shot in the head, he said.

His mother, Sheri Shubert, "wailed" and "screamed" when she found out her son was in the hospital, she told "GMA."
But he wasn't critically hurt; the bullet went through the back of his head and out the side, Rome Shubert said on "GMA." If the wound was anywhere else, he said the doctors told him, he could have been paralyzed or killed.

The star baseball player at Santa Fe High School returned to the field the next day, he said, to "give a little feeling of hope." He wore the initials of the victims on his wrist as he played.

Standing with "GMA" co-anchor Michael Strahan as the sun rose over Santa Fe High School this morning, Beazely said he never thought a school shooting would happen there.

"You see it on the news happen at other schools, and it's sad until you actually end up experiencing it," he said.

Pagourtzis is in custody and has been charged with capital murder, officials said.

The suspect allegedly wrote in journals that he wanted to carry out the shooting and then commit suicide, but he gave himself up to authorities, according to Texas Gov. Greg Abbott, who called the shooting "one of the most heinous attacks that we've ever seen in the history of Texas schools."