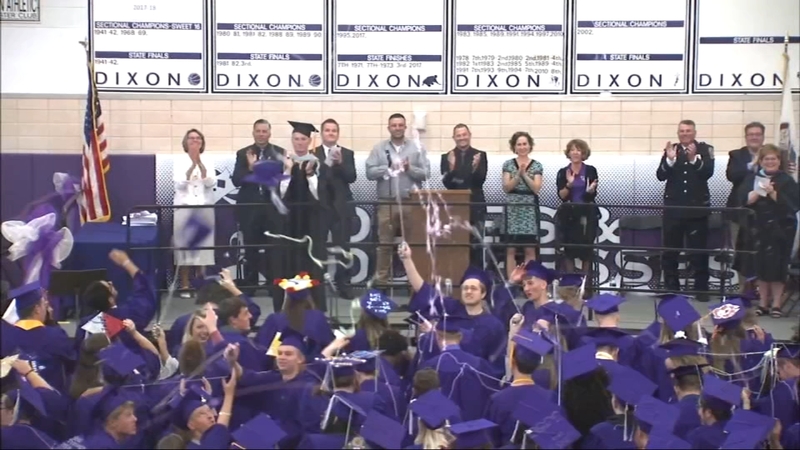 No one was hurt in the shooting on Wednesday, but the alleged shooter, 19-year-old Matthew Milby, exchanged gunfire with school resource officer Mark Dallas who eventually caught the teen.

Milby, who earned enough credits to graduate Sunday, was in jail on Sunday on felony charges for going on campus with a semi-automatic rifle and firing shots.

He opened fire inside the gymnasium where graduation rehearsal was supposed to happen.

"I was just so happy to have all my classmates together. Because imagine if something had escalated more than it did?" said graduating senior Madison Howard.

"I was definitely affected by it today. All these people you know and are so close with and we all went through that together," said graduating senior Ashley Jones.

Sunday's ceremony had tight security. No backpacks or large purses were be allowed, and everyone entering was subject to search.

Dallas, the school resource officer who returned the shooter's fire, led the seniors into the gym on Sunday. Onstage during the diploma presentation, Dallas hugged each of the 182 graduates. He and weightlifting coach Andrew McCay were given a standing ovation for their actions that day.

"Due to you running in we were able to make it out safely besides a sprained ankle and bumped knees," said Emma Krull, senior class president, during the ceremony.

The district really wanted Sunday to be special for the graduating class, but it was under the watchful eye of several police officers. During another school shooting in Texas at Santa Fe High School, eight students and two teachers were killed.

"We mourn the loss of innocence. It shouldn't be happening so fast," said Mayor Liandro Arellano Jr.