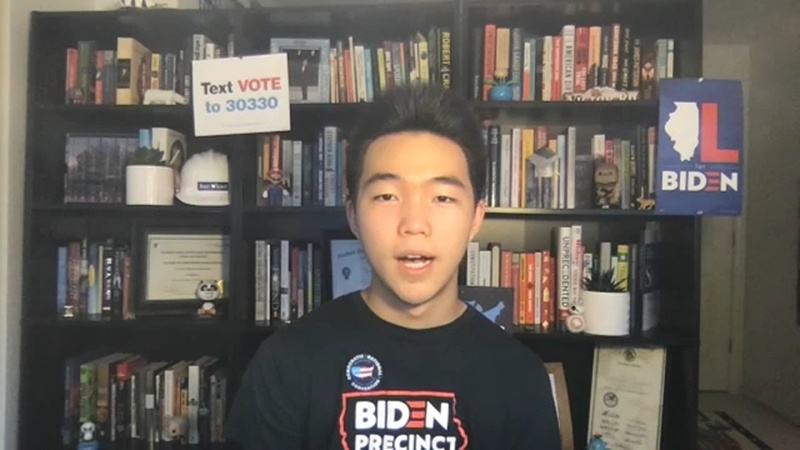 CHICAGO (WLS) -- The Democrats geared up Tuesday for day two of their virtual convention with a focus on leadership.

For the Illinois delegation, women leaders and women's rights will be the highlight as they come off a successful first night with a speech from former First Lady Michelle Obama. Tuesday's plan includes two former presidents who are expected to champion Joe Biden's experience and reputation. They are said to continue their efforts to portray Biden as everything President Donald Trump is not.

A look ahead to tonight's speakers at the DNC Convention.

One of those watching closely this year is Victor Shi. At just 18-years-old, the recent Stephenson High School graduate is the youngest Illinois delegate at the 2020 DNC.

Shi even appeared in a brief video clip Monday night, sharing his support for Joe Biden.

Joe Biden introduced the breadth of his political coalition to a nation in crisis Monday night at the convention, giving voice to victims of the coronavirus pandemic, the related economic downturn and police violence and featuring both progressive Democrats and Republicans united against Trump's reelection.

"I know that Joe Biden is the person to restore the values that we hold so near and dear to our hearts," said Shi, who says Biden can attract young people. "When Bernie Sanders dropped out, there was some hesitancy from on behalf of the younger generation to support Joe Biden, but what we've seen since is really promising."

Women's rights are a big focus Tuesday as the country marks the 100th anniversary of their right to vote.

"This is a moment for women, a transformational moment," said Jan Schakowsky. "A lot can be said about this President and the sexism that he exhibits every single day."

RELATED: Everything to know about the 2020 Democratic National Convention

Former presidents Jimmy Carter and Bill Clinton are among the big-name speakers Tuesday night, with rising star Congresswoman Alexandria Ocasio Cortez also having a part; although, she reportedly was only given one minute for a recorded message. Former Second Lady Jill Biden is the keynote speaker.

Illinois Comptroller Susana Mendoza also chimed in, saying "our country's soul and the very fabric of our democracy is at stake with Donald Trump at the helm. And it's really our moral and civil civic obligation to get out as women and set our country on a better course."

But virtual meetings are presenting a challenge for firing up voters and generating the post-convention bounce, North Central College Professor Stephen Maynard Caliendo said. He teaches political science at the Naperville school.