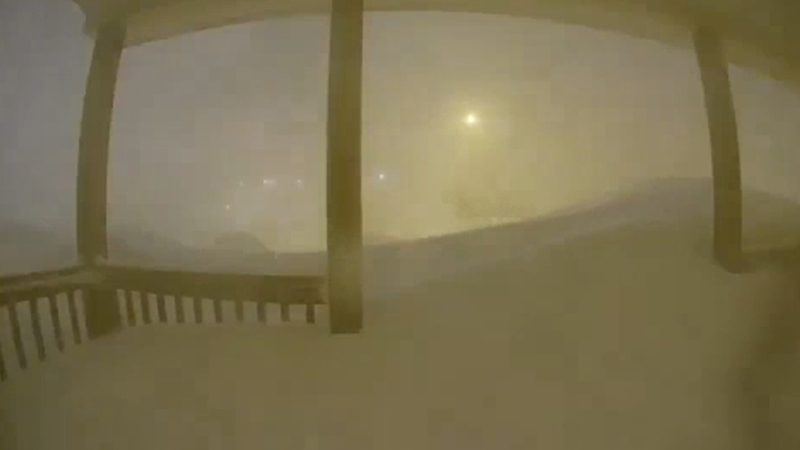 ST. JOHNS, Canada -- After 36 hours of snowfall, Canadians are saying that there is just "too much snow."

The snow was so high, it blocked most residents' doors and garages.

In the video above, doorbell camera captures a lapsed video showing a home in St. Johns being buried under the heavy snowfall.

People in that city had to dig out their yards after a record 76.2 centimeters fell.

There have been no reports of injuries, though some had to be evacuated from their homes in the outer area of St. John's because of an avalanche.

A state of emergency remains in effect for St. John's, with winds still howling at more than 90 kilometers an hour.

The premier of Newfoundland has formally asked the federal government for assistance, including mobilizing the armed forces.

Officials say they will help in any way they can, including using reservists in the area to help with snow removal.

Getting access to the hospital is priority number one for some families.

"So, we have a real issue right now with people who are on dialysis and getting access to the hospital. That's a big priority," said neighbor Seamus O'reagan. "You also have chemo patients who need to get in and out of that hospital in St. John's and as well, you've had your workers in that hospital, some of whom are going out for about 36 to 38 hours."

With roads that have turned into ski hills, many are searching for the fun in the midst of such a mess.

Newfoundlanders certainly have the most shoveling to do, but right across the country, Canadians are dealing with wild winter weather.

Southern Manitoba is under a winter storm warning with strong winds and snowfall of up to 25 centimeters expected.

Meanwhile, Toronto is in the midst of its first blast of winter, so far this year.

In British Columbia, more snow is expected with avalanche risks on the south coast.

Meanwhile, Victoria is bracing for flooding with high rainfall amounts expected over the next day.