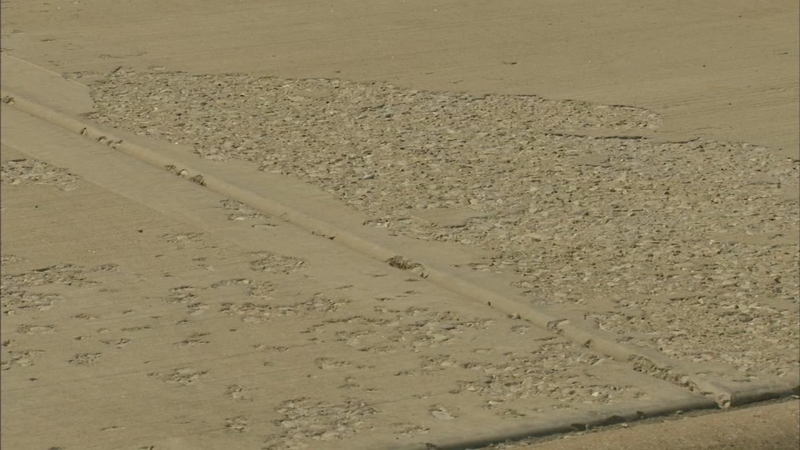 MANHATTAN, Ill. (WLS) -- Homeowners in a south suburban subdivision are frustrated by concrete driveways they say are falling apart.

Most of the homes were built in just the past few years, prompting residents to question why they're already having problems including flaking and pitting.

The I-Team spoke with multiple contractors, who said a freshly poured driveway can cost between $10,000 and $15,000. Residents of Manhattan want to know why their relatively new investment is already cracking and crumbling.

"I'm barely touching it, it is all chipping," said Veronica Lizak in her home driveway.

"When it starts raining anything it just starts to chip," Lizak said of the patches of imperfections.

Similar patches can be seen all over some driveways which residents said are anywhere from one to four years old, in the Prairie Trails development in Manhattan. The newer sub division was built by Distinctive Home Builders. The concrete was poured by a subcontractor.

The I-Team went door to door one hot afternoon. In just a few hours they found seven driveways with chipping, peeling or pitting. A Facebook page for the Prairie Trails subdivision also features complaints from residents.

"It looks bad," Lizak said. "It's not nice when we have guests come over to see a driveway like this."

The I-Team contacted Apollo Concrete, an unrelated company, to find out what causes the types of problems being seen in the subdivision.

They said premature deterioration can be caused by multiple factors including the type of rock, design of the mix or the way it was installed, but that problems in most concrete driveways should not arise for at least 10 to 20 years.

"As you can see there are holes that just appeared out of the concrete, that's not natural to it," said Tony Uranan.

Uranan said his driveway is showing dents and pits also known as "spalling" after three years of buying into the new property.

"After being here three years you should not be experiencing these kind of defects in the driveway," he said.

Steve Schussler said he also has damage in his driveway, though he doesn't know what kind it is. He's lived in his home for two years.

Schussler said the developer came out to take pictures but he hasn't heard anything back. Other residents said they haven't formally complained to the developer, because they've heard other homeowners aren't getting the answers they want.

"We have this cracking all the way along the entry to my garage," said James Kasprzycki.

One resident bought her home more than a year ago. She said she emailed Distinctive Home Builders and they told her the concrete is not under warranty and that disputes must go through a contractually required arbitration process.

They added in an email, "...the problem you have is clearly not caused by any material or workmanship issues..."

A Distinctive representative told her she was warned at closing to "minimize the use of salt" on her driveway. She said they have never put any salt on the driveway.

Concrete supplier Willie Brothers looked into her matter as well and sent her a letter saying everything was done properly.

In a statement to the I-Team they added, "...given the extremely harsh Chicagoland area winters and the abundance of road salt on both local roads and expressways, it is not uncommon for...minor scaling and pop-out issues over time. Unfortunately, this can occur even when the concrete produced meets all specifications and is properly installed by the contractor."

The concrete supplier said it will address complaints on a case by case basis.

In a recent email, Distinctive Homes said it would have a sample of one consumer's concrete tested by an independent lab, but only if she complied with her home contract. Distinctive said that contract prohibits "negative social media and other comments" about the company.