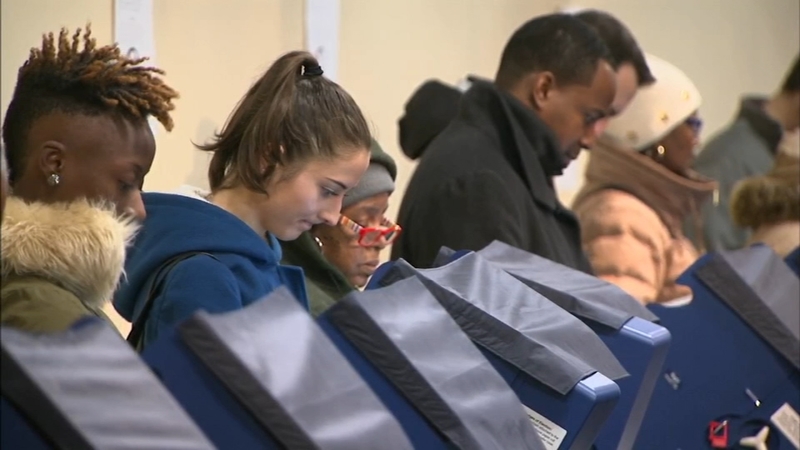 CHICAGO (WLS) -- On the last day of early voting in Cook County and Chicago, officials said early voters are showing up in record numbers.

The pivotal election will determine Illinois' next governor and which party controls Congress.

At the Loop Super Voting Site on West Washington Street, the line wound around at least two blocks of downtown office buildings. Some voters waited upwards of an hour to cast their ballot.

"I would not miss voting this year," said early voter Robin Shapiro. "I'm actually, tomorrow, driving across country at 5 a.m. and so I made sure to be here this morning to get in early and vote."

"I think a lot is at stake and everything has been shown in this last year or so, through the president and also the state level," said early voter Carnea Wiggins.

"I'm like, why isn't there an app for this? There are a lot of people out here, and it is refreshing to see that people still care," she said.

After early voting ended Monday evening, the Chicago Board of Election Commissioners said a total of 223,548 early voting ballots were cast this year, a 96 percent increase from the 2014 midterm election.

People lined up for blocks to get to Chicago's Loop voting super site for the last of early voting.

"The buzz clearly is that we're going to have a bigger turnout," said Orr. "We see so many signs, but they're not necessarily provable at the point, we'll see that tomorrow."

"We are probably not going to beat 2016, but that is still extraordinary, the turnout numbers there," he said.

Elections officials say the reason for higher voter registration numbers may be due to the ability to register online. Meanwhile they are also seeing women voting in high numbers.

All 51 Chicago early voting sites are scheduled to be open until 5 p.m., and six sites, the Loop Super Site, Roden Library, Welles Park, West Side Learning Center at Malcolm X College, King Community Center and Mount Greenwood Park will remain open through 7 p.m. Monday. Any voter in line at 7 p.m. will be allowed to vote.

Governor Bruce Rauner rallied local Republicans at a bar in Orland Park. Rauner might be the sitting governor, but polls say he is trailing J.B. Pritzker.

Nevertheless, the governor is embracing the role of underdog. He believes Republicans statewide will turn out the vote Tuesday.