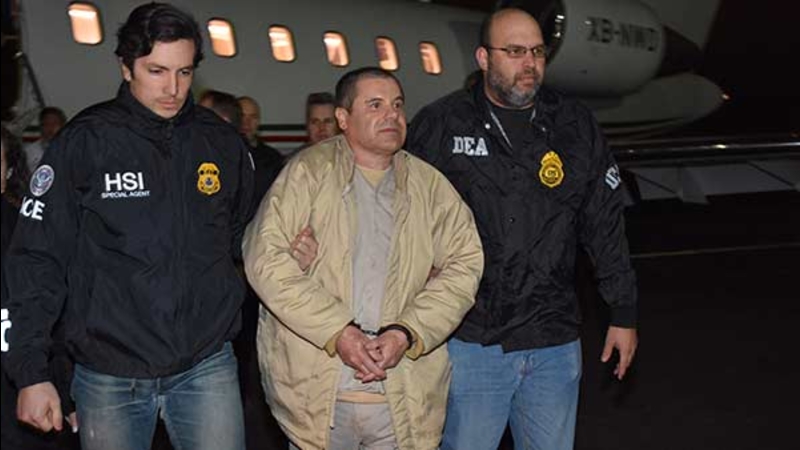 CHICAGO (WLS) -- Joaquin "El Chapo" Guzman was extradited to the United States Thursday to face drug trafficking and other charges, the I-Team confirmed.

El Chapo landed at MacArthur Airport in Islip, N.Y., around 9:30 p.m. Eastern Time where he was met by dozens of law enforcement personnel. He will spend Thursday night under close guard in lower Manhattan. He will appear in court in Brooklyn Friday.

Mexico's Foreign Relations Department announced Guzman was handed over to U.S. authorities for transportation to the U.S. on Thursday, the last day of President Barack Obama's administration and a day before Donald Trump is to be inaugurated.

The Justice Department released a statement confirming Guzman had arrived in the U.S. to face six indictments and thanking the Mexican government.

"The Justice Department extends its gratitude to the Government of Mexico for their extensive cooperation and assistance in securing the extradition of Guzman Loera to the United States," the statement said in part.

Joaquin "El Chapo" Guzman is being extradited to the United States to face drug trafficking and other charges, the I-Team confirmed Thursday.

An official said the U.S. Drug Enforcement Administration took custody of Guzman in Ciudad Juarez, across the border from El Paso, Texas, and a plane carrying him departed for New York at 5:31 p.m. Eastern time. The officials agreed to give the information only if not quoted by name because they were not authorized to discuss the matter publicly.

The flight to New York takes a little more than four hours from the Juarez airport just south of the border from El Paso.

El Chapo is responsible for supplying 80 percent of Chicago's cocaine and heroin according to law enforcement and is facing indictment in the north district of Illinois and five other U.S. districts.

The convicted leader of the Sinaloa Cartel held most recently in a Mexican prison was recaptured a year ago after making a second brazen jailbreak.

He had been fighting extradition to the U.S. but on Thursday, there came word that Mexican Supreme Court justices had denied his latest effort and he was turned over to American drug agents.

While the Chicago indictment was considered by many to be the strongest against El Chapo, the eastern district of New York case last summer was stripped of its death penalty charges which cleared the way for Mexico's approval.

El Chapo likely to be put up in the MCC-Brooklyn Thursday night according to a former justice department official who told the ABC 7 I-Team that the drug lord will probably be brought to JFK Airport and then escorted by the NYPD and U.S. marshals to Brooklyn.

He may make his initial appearance in a federal courtroom Friday according to the I-Team's sources.

In August, his son was kidnapped from a Puerto Vallarta restaurant, in what was perceived as an attempt to exploit the cartel's vulnerability. He was later freed.

The trafficking of heroin, marijuana, cocaine and methamphetamine into the United States from Mexico is an annual $19 billion to 20 billion industry, according to a Department of Homeland Security report.

And the Sinaloa cartel has traditionally held a dominant share of that, thanks to Guzman's sophisticated business strategies and Sinaloa's control of trafficking routes. A Customs and Border Protection report that analyzed seizure data along the border between 2009 and 2010 found that "the removal of key personnel does not have a discernable impact on drug flows" into the US.

El Chapo was aware that drug trafficking won't end once he's gone. "The day I don't exist, it's not going to decrease in any way at all," he told actor Sean Penn in an interview before he was captured.