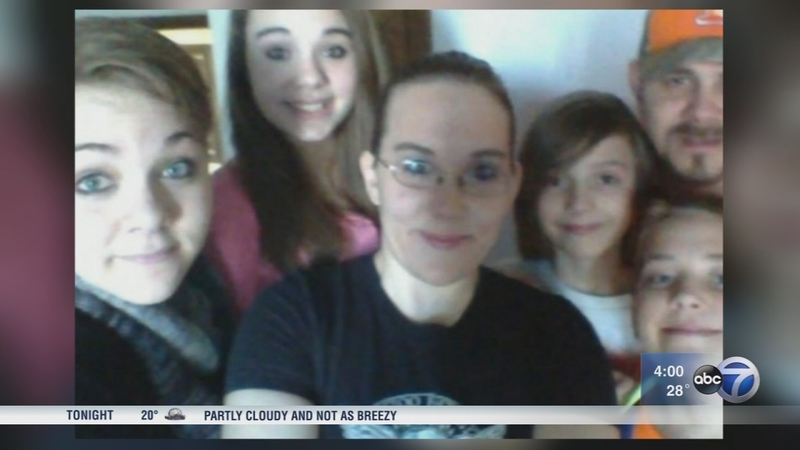 ELGIN, Ill. (WLS) -- Four people, including three children, were rescued early Tuesday morning from a house fire in northwest suburban Elgin. They were all hospitalized.

Amy Bishop's family lived in a second-floor apartment in large residence in the 300-block of Division Street. She asked for prayers Tuesday. They have absolutely nothing left, days before Christmas.

"It's so hard to lose everything," Bishop said. "Our dog died, our bird died and our turtle died. Only one of our dogs survived. We lost everything. We have nowhere to go."

Both sisters called 911, crying and frantic.

"I can't see! Please hurry! There's a fire in the bedroom!" one sister said, through tears.

The girls said they were trapped in one of their rooms and didn't know if their brothers were OK.

"Guys, they're coming!" the other sister screamed to her siblings, while on the phone with a dispatcher. "We can't breathe! Please hurry... It's so hot in my room."

Amy Bishop said her two sons were on her bed near a wall-mounted heater when the mattress caught fire.

"It started the mattress on fire even though it's a couple feet away. The heaters, you can't really avoid them. They're all over the walls up there in the apartment," Bishop said.

Tyrone Strother said he was watching TV in his first-floor apartment when he heard screaming coming from the rooms above him.

"I ran upstairs. When I ran upstairs, I saw here was a fire and kids were screaming. I got them. They were in shock. Weren't moving or nothing. Just standing there," Strother said.

He said he was able to get the two boys out, but not their sisters.

"By that time, the fire was too intense. My hands started burning! Had to come back downstairs," Strother said.

Willis Weiler, another neighbor, saw one of the sisters break a window to escape the smoke and yell for help.

"She had one leg out, upper body hanging on by a hand. Billowing smoke was pouring out," Weiler said.

"Her hair is burnt. They are black from head to toe. They've got really bad smoke inhalation, frostbite on their feet and third-degree burns in various places," Bishop said.

Despite their injuries, they are all expected to be OK.

The fire was extinguished in about 20 minutes, officials said. The second floor of the house sustained extensive fire damage in a rear bedroom, with heat and smoke damage throughout the remainder of the floor, fire officials said. The building was subsequently deemed uninhabitable.

As of Tuesday afternoon, the Bishops and Strother's family of five were still looking for a place to stay.

A GoFundMe page was set up for the Bishops. CLICK HERE to make a donation.

"I feel everything happens for a reason. Grandma always said, 'God doesn't give you more than you can handle.' Apparently we can handle a whole lot," Amy Bishop said.