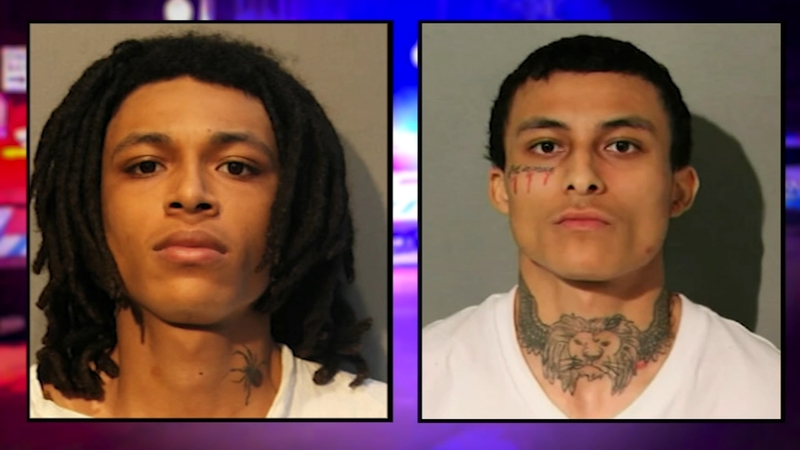 CHICAGO (WLS) -- Two of Cook County's most notorious accused criminals are not being held in Cook County, the I-Team has learned.

Eric and Emonte Morgan, the brothers charged in the shooting death of Chicago police office Ella French in August, are locked up in separate suburban facilities outside of Cook County.

The deadly shooting happened during a Saturday night traffic stop in West Englewood by one of CPD's community safety teams.

Authorities said the Morgan brothers wrangled with three officers when there were shots fired and a foot chase.

French was killed and her partner critically wounded.

"When the call came over that there were two officers down. Obviously it was a very traumatic experience for us," said CPD Communications Operator Keith Thornton. "We just did what we had to do to try to save people and you know, was a bad outcome, but we just keep pressing on."
Thornton and dispatcher Patricia Bounds were working that night. They were honored in a ceremony Tuesday, even as the criminal case presses on.

And while the accused brothers await their next court date in March, they are housed in separate suburban jails.

Eric Morgan, 23, is in far west suburban Kendall County jail, records state and police officials confirm. The older of the two Morgan brothers is listed in both Cook County and Kendall County records as currently being housed in the Kendall facility located at 1102 Cornell Lane in rural Yorkville, Ill.

Celebrities, well-known local figures and individuals charged in controversial or high profile crimes, especially those in which a police officer was killed, are frequently transferred to jails away from where the incident occurred, for their own protection.

Even though Eric Morgan is listed in Cook County jail records, the fine print shows where he is actually housed: "Kendall CO general." That translates to the Kendall County jail, general population. That facility is nearly 60 miles from Cook County; a place where distance may equal security, for a high-profile detainee. And Kendall's records even show Morgan as a prisoner, along with their own mugshots.
Kendall County jail officials have told the I-Team that Cook County has a contract with them to house prisoners in Yorkville whenever necessary.

"It is Cook County's call," a Kendall County law enforcement official said. "They just send over the prisoner."

The second accused killer in the French case, 22-year-old Emonte Morgan, does not appear to be listed in any jail database. However, a spokesman for the Cook County jail tells the I-Team that both brothers "are being held in custody in separate facilities in other jurisdictions for security reasons."

Attorneys representing Emonte and Eric Morgan did not respond to messages left by the I-Team.

Both men are being held without bond.