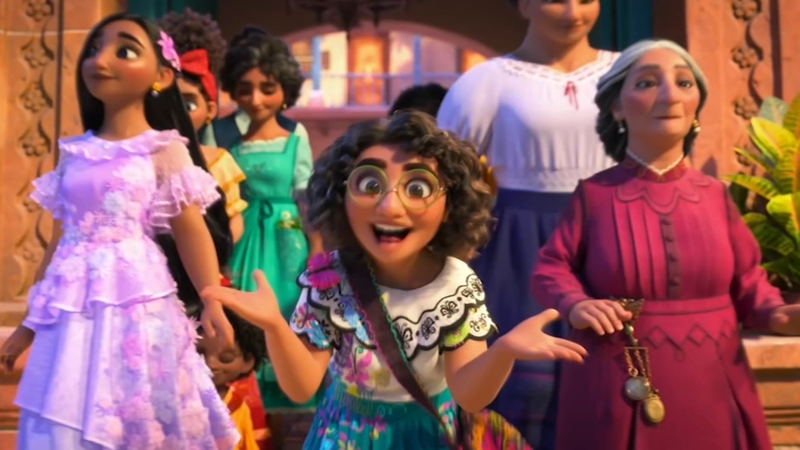 CHICAGO (WLS) -- "Encanto" debuted at the top of the box office, making over $40 million during the long holiday weekend. It's the biggest opening for an animated movie during the pandemic.

Hosea Sanders talked to the stars who get to sing the Lin-Manuel Miranda soundtrack to bring their South American characters to life.

"Absolute, total, 100% dream come true," said Stephanie Beatriz, who lends her voice to Mirabel. "I've been dreaming of being a Disney character voice since I was a little kid. This incredible adventure, lush, gorgeous film, I get to be me, a Colombiana Disney heroine. I couldn't have imagined something so cool."

"It feels incredible, it was like something that I sort of dreamed about when I was a kid," said Diane Guerrero, the voice of Isabella. "And to have it come to life in this story, to see the food that my parents prepared, to see some of those colors that I grew up with and hear the music that I danced to as a kid and I still dance to, to this day."

"The most important thing for me was to make sure that I brought the fun as well as the depth," said Jessia Carrow, the voice of Luisa. "But also to remember to rock out, because he writes in such a beautiful way it allows your voice to soar to the heights."

"I think it's such a powerful statement to see the whole spectrum of Latinidad on film in an animated movie," said John Leguizamo, the voice of Uncle Bruno. "So every kid can see themselves and feel like, 'Wow, I can be somebody, I can do something,' because that's what it does when you see this film, you feel empowered."

"Encanto has really, really carefully stitched together the DNA of a culture, to make sure that all families, outside of Colombians, can go for a ride that they themselves can relate to," said Wilmer Valderrama, the voice of Agustin. "That's what a Latino is. That's what a Hispanic is. All flavors for everyone."