There were some big winners and a lot of hardware handed out. Chris Stapleton, Jon Pardi and Little Big Town were among the winners.

But far more than trophies it was the heartfelt message that people went with, a message of unity and bringing our country together, and it was a non-country star that may have gotten the biggest reception with his speech.

"Come together and find some common ground, spend some time listening to each other and realizing that we are more alike than not alike," Tyler Perry told the crowd.

"Kindness is an attractive quality," Karen Fairchild of Little Big Town noted during her acceptance speech.

A moving In Memoriam by Carrie Underwood honored not only those lost in the country music this year, but also the victims of the Las Vegas shooting. And backstage Brothers Osborne spoke on gun control and country music sending a message.

WATCH: CMA Awards pay tribute to the victims of the Las Vegas shooting 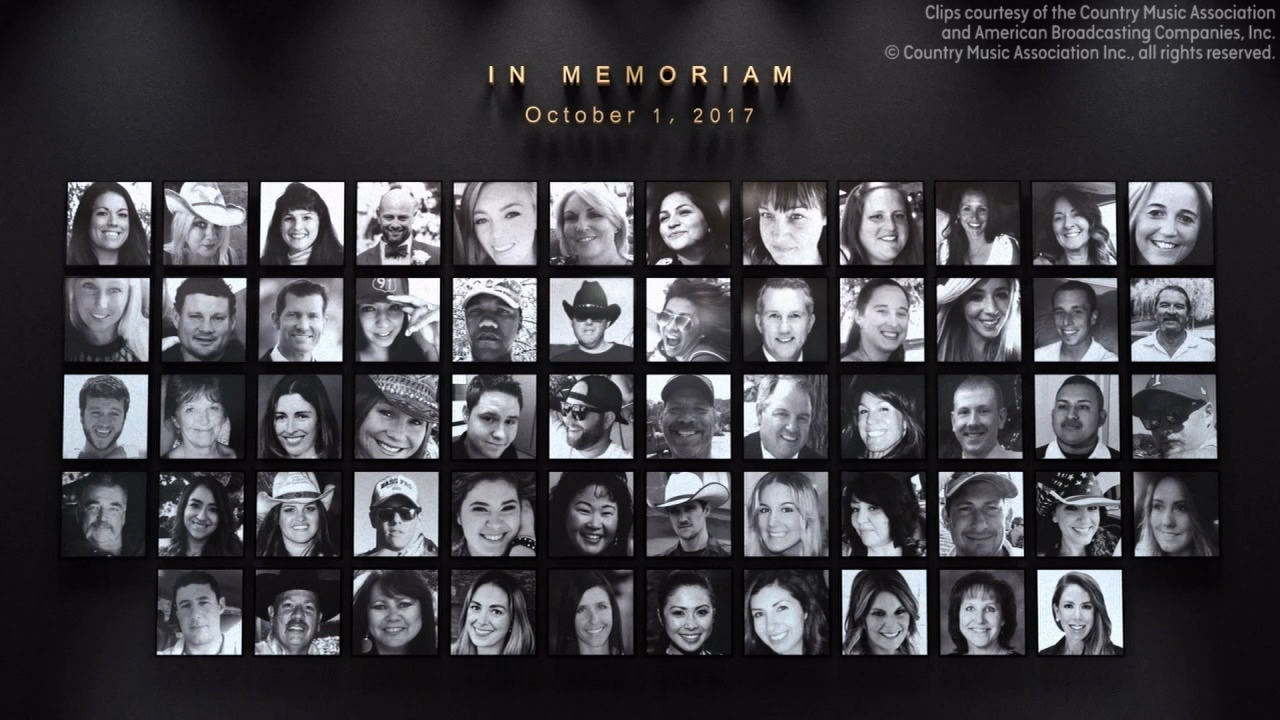 Glen Campbell, who died in August, was honored during a touching performance of "Wichita Lineman" by Little Big Town and Jimmy Webb, who wrote the song.

The Grammy-winning country foursome sang the tune, while Webb played piano, at the Bridgestone Arena on Wednesday in Nashville, Tennessee.

Campbell also won an award: He posthumously won musical event of the year for "Funny How Time Slips Away" with Willie Nelson.

Rascal Flatts and Dierks Bentley also paid homage to Troy Gentry, one-half of the popular country duo Montgomery Gentry, who died in a helicopter crash in September. Eddie Montgomery later joined in for the performance of "My Town," as some audience members sang along with tears in their eyes.

Eric Church, Keith Urban, Darius Rucker and Lady Antebellum opened the CMA Awards with a memorable performance honoring the 58 people killed at a country music festival last month. The show kicked off with Church singing an emotional version of "Amazing Grace," later joined by the other performers for "Hold My Hand."

Reba McEntire, Luke Bryan, Thomas Rhett, Tim McGraw and others joined in to sing along, earning a large applause from the crowd.

"This has been a year marked my tragedy ... Tonight we're going to do what families do, come together, pray together, cry together and sing together, too," Underwood said.

"This show is dedicated to all those we lost," fellow host Brad Paisley said.

Paisley and Underwood are celebrating their 10-year anniversary - as hosts of the CMAs. They joked at the top of the show about CMA sending restrictions to press about what to ask singers on the red carpet, saying they shouldn't ask about politics or guns. They also riffed on politics, taking shots at both President Donald Trump and Hillary Clinton. 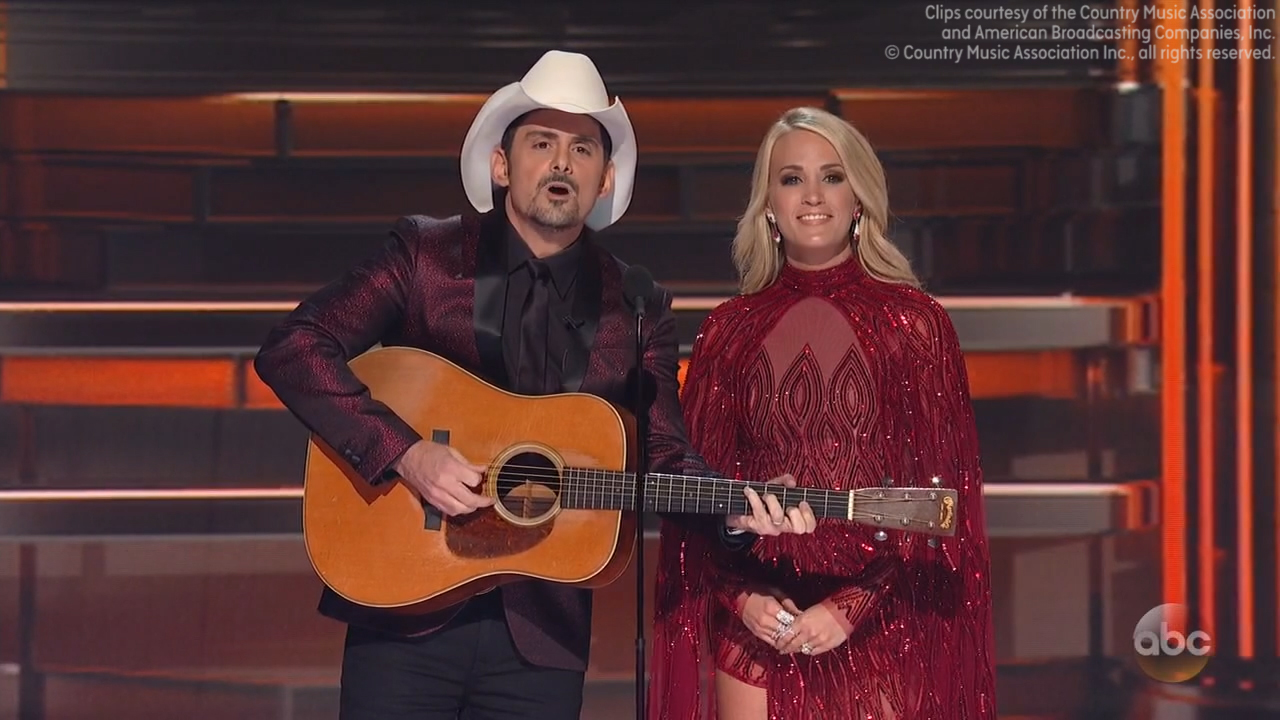 "Maybe next time he'll think before he tweets," they sang to the beat of Underwood's massive hit, "Before He Cheats."

Though Taylor Swift is releasing her second pop album this week, she's still being awarded for her contributions to country music.

The singer won song of the year - awarded to songwriters - on Wednesday for writing Little Big Town's No. 1 hit, "Better Man." Swift - who will release "reputation" on Friday - didn't attend the show, but Little Big Town thanked her onstage.

"Thanks to Taylor Swift. She couldn't be here tonight but Taylor, wherever you are, thank you for this beautiful song," Little Big Town's Karen Fairchild said onstage.

Sam Hunt's "Body Like a Back Road," which set a record for the most weeks at No. 1 on Billboard's Hot country songs chart with 34, lost single of the year to Urban's "Blue Ain't Your Color."

The CMA Awards, a show where Justin Timberlake and Beyonce have performed, featured pop singer Pink this year. She sang her slow tune "Barbie," backed by several musicians and singers.

"I love it when legendary artists like him perform on the CMAs. I think in our world today and even in country music, it's kind of like ... 'Who's new? Who's hot? Who can we get for the show?' And it's nice when you can have somebody that can go up there and show us how it's all done," she said.

But Paisley said Underwood will have the night's brightest performance.

"I'm telling you if that's not the No. 1 most-talked about thing the next day then I will be as wrong as I've ever been," he said.

Brothers Osborne won vocal duo of the year and Jon Pardi who won new artist of the year.

It's country music's biggest night, and the stars are out on the CMA Awards red carpet.

Fans got there early, some even waiting overnight to see their favorite country stars. And those musicians know they have the best fans in the industry.

The red carpet is open and the 51st Annual CMA Awards are just hours away.

"Country music definitely does have the most loyal fans and it's cool to watch, because you get to know them. And I think it's neat when a total stranger identifies with you through your music, through your art. And it gives you the fuel to keep making music, keep telling your stories, because they're someone else's stories too," said singer Miranda Lambert.

The big event is hosted by Brad Paisley and Carrie Underwood, their 10th year in a row taking on those duties.

The Country Music Awards will air 7 p.m. Wednesday on ABC7.

The co-hosts said the night will include collaborations between country legends and newcomers along with special tributes, but many stars said the CMA Awards just feel like they're coming home.

"We always feel like the CMAs is a giant homecoming for everybody because we spend so much time on the road that we don't get to see each other," said Rascal Flatts member Jay DeMarcus.

Coming together is the common theme for the awards, meaning viewers can look out for surprise performances and unique duets on stage.

"To able to be nominated obviously is amazing but to get to sing with Reba that's an award in itself period. I can't wait to frame that picture and put it on my shelf," singer-songwriter Kelsea Ballerini said.

In the midst of the celebrations, the artists will pay tribute to those who lost their lives in last month in Las Vegas -- something Paisley wanted to ensure was addressed.

"The interesting thing about this year obviously is that it runs the gamut from horrifying and awful occurrences to some wonderful things, and so we have to somehow navigate that with our monologue," Paisley said.

"This is one thing we're good at in country music is ... I think therapy and that's kind of what we are going to be this week in some ways," Paisley added. 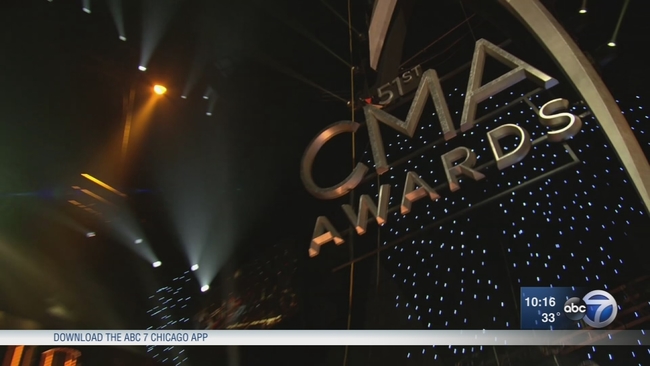