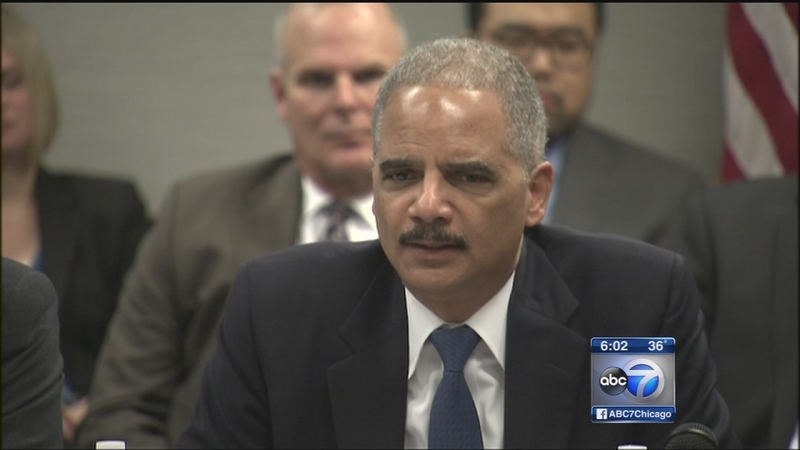 CHICAGO (WLS) -- Attorney General Eric Holder said the United States is facing critical times when it comes to a lack of trust that exists between some communities and law enforcement, and he met with representatives of both sides during a visit to Chicago Friday.

The Chicago stop on Holder's national tour is to show White House concern for what many say are deteriorating relations in African American communities around the country with their local police departments.

"Our nation is facing some critical times," Holder said. "We have to ask ourselves some fundamental questions about the lack of trust that exists between some communities and the law enforcement officers who serve those communities."

Meeting participants acknowledged worsening relations between police and many in the African-American community during the national controversy surrounding the deaths of Eric Garner in New York and Mike Brown in Ferguson, Missouri. The police officers involved in those cases were not indicted.

Holder's tour is part of a White House strategy to begin a national conversation on the issue.

The invited guests were predominantly African-American. They talked about the worsening relationship between police and their community in Chicago a city with a sordid history of wrongful arrests and convictions, even torture of black men.

"You need more people to get involved," said activist Patrick Vance. "You just can't send one person out and just think it's going to change the same day. You gotta to get everybody involved."

"I feel that I'm important, that we're all important," said activist Tevin Wilson. "Our young youth, we're the future, so we should be heard."

The Attorney General also addressed the Illinois Judges Association, again focusing on the need to restore faith in the criminal justice system.

"Out of these heart-rending tragedies comes, I believe, a singular opportunity for our great country to confront difficult issues that have too often been ignored, and too easily swept under the rug," said Holder. "We must not squander this opportunity."

Those invited to attend the meeting included about two dozen very carefully chosen civilians, most of them with political ties to Mayor Emanuel.

At the federal building, community activist Mark Carter was not invited or allowed in the meeting.

"They want to put those voices out that they can turn off and turn on," he said. "They don't want the real people to speak."

Participants said this was only the beginning of a continuing conversation. However no dates for future roundtables or meetings were announced.