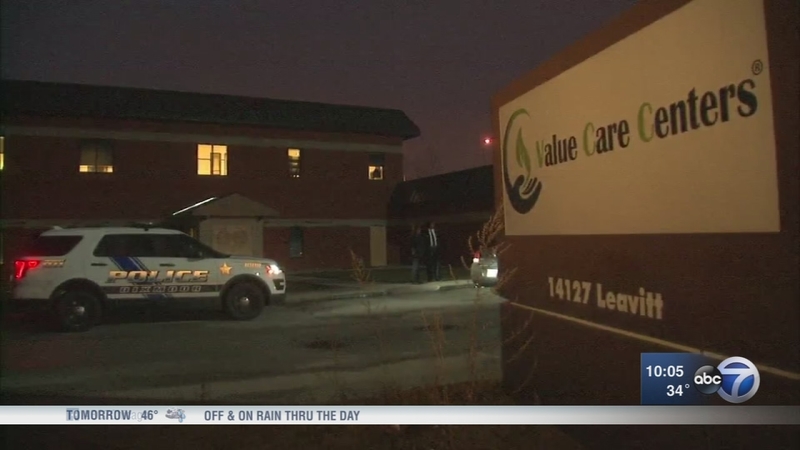 DIXMOOR, Ill. (WLS) -- An assisted-living home in south suburban Dixmoor had to be evacuated Thursday night, police said, after residents were found living in squalor.

Chief Ron Burge said they got a call from a resident late Thursday night saying they were locked inside with no staff around to help inside the Value Care Centers at 141st Street and South Leavitt Avenue.

When police got there, they found residents had no hot water and some had no access to their needed medications. Police said there were items on the ground, residents sleeping on mattresses on the floor, five exits were padlocked and bed bugs were all over.

"No one is on staff, we can't locate anybody," said Burge. "We've been trying to locate since last night. According to the client this is done on a regular basis, they lock them in the facility and come back the next day. It's unheard of."

"I doubt very seriously anybody was getting any care at this facility," he added.

The decision was made to immediately evacuate the 30 male residents and five female residents between the ages of 20 to 50. They were taken to six local hospitals to be cared for.

Angie Britch's son Bailey, who has autism, had been sounding alarms for weeks she said.

"You could look at him and he smelled and he had on just dirty clothes, his hair was really kind of grimy, that you could just tell it hadn't been washed the right way," she said.

Police said the owner of the assisted living facility, which is also known as Mothers House, was operating without a business license. In January she was given a cease and desist order from the village of Dixmoor, and then complained to village trustees she was being harassed by the police.

"She came to the Village Board meeting stating that they threated to lock her up based on signing some paper they had given her," said trustee Fitzgerald Roberts.

Village Trustees Roberts and Toni Mitchell said it is all a misunderstanding. They believe the woman that runs the facility is not being treated fairly by police.

"We have had an issue, with this problem, with this situation before all of this happened," Mitchell said.

The trustees say Dixmoor's building inspector was recently fired and that is part of the problem.

"We need a building inspector, someone who can go in and come out and say look, this place is not livable, we need to smack a sign on the door," Roberts said.

Police are now pursuing criminal charges against the owner.

"You cannot come in town and set up shop without a license in the Village of Dixmoor," Burge said.