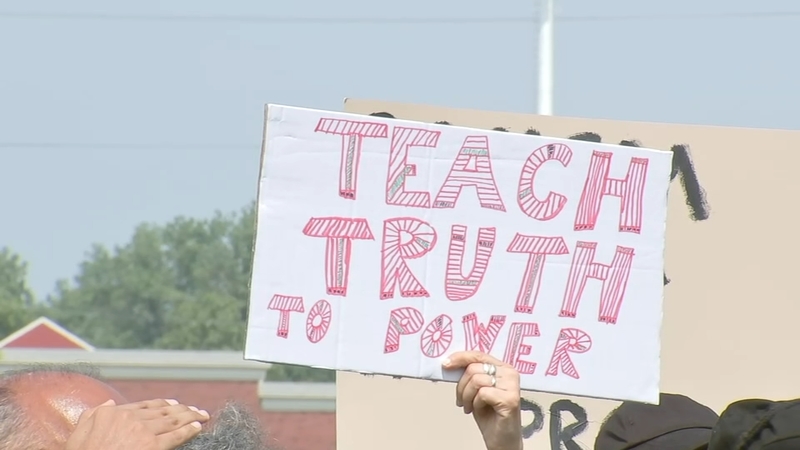 EVANSTON, Ill. (WLS) -- Critical race theory has been in the spotlight recently as parents go back and forth on what kids should learn in school, but Tuesday in Evanston they made their stance clear, saying that education is a necessity for our nation to move forward.

People of all ages and races gathered in Evanston Tuesday to stand up to a drama teacher's lawsuit against District 65.

Stacey Deemar has taught in the district for nearly 20 years. Her lawsuit alleges anti-white discrimination because of what the district calls anti-racist training and education.

One of her examples in the lawsuit is an image which says "Whiteness is a bad deal! It always was."

Along with Tuesday's rally, 1,500 people signed a petition against that lawsuit.

"I see this conflation of critical race theory and attacks on anti-racist policies here in Evanston and across the nation as being nothing more than a war on reality itself," said Sebastian Nalls, Evanston community activist.

Critical race theory, taught mostly in graduate and law schools, has become a hot topic as schools work to teach more accurate histories of people of color in America. Sarah Bogan, a former student in District 65, said she missed out on that education.

"I didn't learn about so many things kids are learning now until college, and I still feel like I'm playing catch up," she said.

Evanston Mayor Daniel Biss issued a statement in support of the district's education and training, saying in part, "Public schools are uniquely positioned to participate in this work by providing a full and accurate accounting of our history, even if this makes some people uncomfortable."

"It's not racist, because there is no racism in learning the truth about our history," said Susanne Angerer, parent of a District 65 third grader.