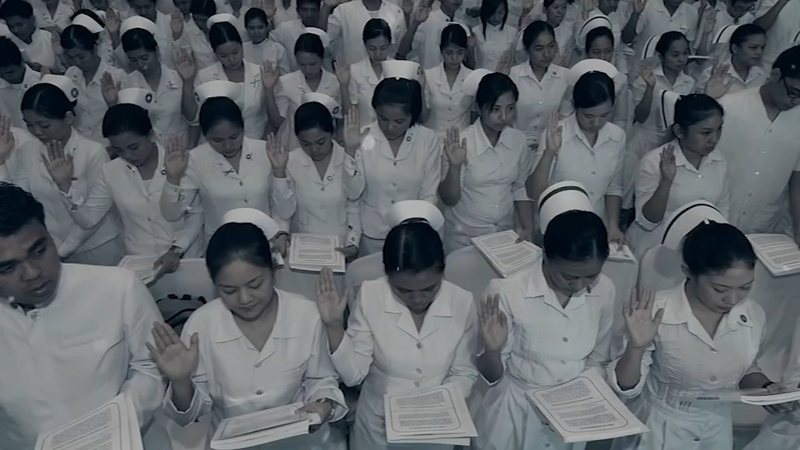 CHICAGO (WLS) -- The story of the Filipino nurse in America is a story of sacrifice and a cultural dedication to the familial, a duty-lead diaspora to the unfamiliar.

"It's the same story that every Filipino family has," said Maruja Torres. "And because of that sacrifice, having that dream to give your loved ones to have a brighter future. You will do whatever it takes. Leaving your childhood behind, leaving your mother country behind."

Filipino nurses served family abroad while on the frontlines in America for decades, yet are often diminished by a stereotype.

"They said all the Filipinos are nurses," Raquel Collanto explained.

"Their guess is always, 'Are you a nurse?' Torres said. "You know for us, is that something bad?"

It's a stereotype they say was imposed on an entire immigrant community and proliferated in the country that called upon them for help.

"It's a problem when the general public misunderstands the Filipino American community through the lens of a flat, one-dimensional, limiting stereotype," said Catherine Ceniza Choy, associate dean of diversity, equity, inclusion, belonging and justice at UC-Berkeley.

The Filipino nurse in America is an immigrant nurse narrative not often noted in U.S. history.

"Filipino nurses are everywhere," Torres said. "Either it's a nursing home, in a home health care setting, in a hospital."

Yet unseen and overshadowed by a preconceived notion of prominence with prejudice. While popular, they are rarely portrayed as such.

Raquel Collanto immigrated from the Philippines after graduating nursing school in the late 1970s. She is now one of the clinical coordinators in Northwestern and the cardiac intensive care unit.

"I was 22 when I came in," Collanto recalled. "I only had $20 in my pocket at the time. I have to help out my family because I'm the oldest one. I'm the first one who left and I'm the person who graduated. So I really have to go through this."

Collanto and the other nurses that were part of her recruitment class, joined the Filipino Chicago health workforce that even two decades later, is still reeling from the Richard Speck murders of two Filipino nurses in Jeffery Manor.

"We were so afraid to go out at night, so what we did was say, OK, let's say you will work, then I will go with you," Collanto said. "I'm unpaid, you are paid. One would just have to wait in the lobby for eight hours just to have someone to be with."

Ceniza Choy, an Asian American historian, author and daughter of Filipino immigrants, said around that time, Collanto was part of an already existing wave of Filipino nurses to fill demands in different states and major cities like Chicago.

"Actually the origins of this migration are rooted in the late 19th and early 20th century histories of U.S. colonization of the Philippines," Ceniza Choy said.

And Filipinos answered the call. But literally answering the call didn't come easy for Collanto.

"My first few months, I don't even want to answer the phone because, 'Can I have anyone that I could speak English?'" Collanto said. "And I said, 'I can speak English.'"

Collanto went from hurdles to heartbreak as she learned of the death of her father over the phone.

"I was so depressed. I worked in the emergency room at a time," Collanto said. "But then again, I still remember him like, 'Just go and fight. I mean, we need you. And also, you have a better life.' You know, you can do that here."

"My aunt is a nurse, my cousins are nurses," she said. "My sister who is also based in Chicago is a nurse. My husband is a nurse."

Her "unsung hero" origins, if put into song, share the same melody and lyrics as Collanto's story.

"Philippines is a third world country and having that dream to give your loved ones to have a brighter future," Torres said. "And being a nurse, that's your major passport."

Although the 2.9 million Filipinos in the U.S. represent 1% of the population, approximately 25% of Filipino working adults are frontline healthcare workers, the Journal of the American Medical Association reported in 2021.

Filipino nurses' crucial representation in the U.S. healthcare workforce did not come without a cost in this pandemic.