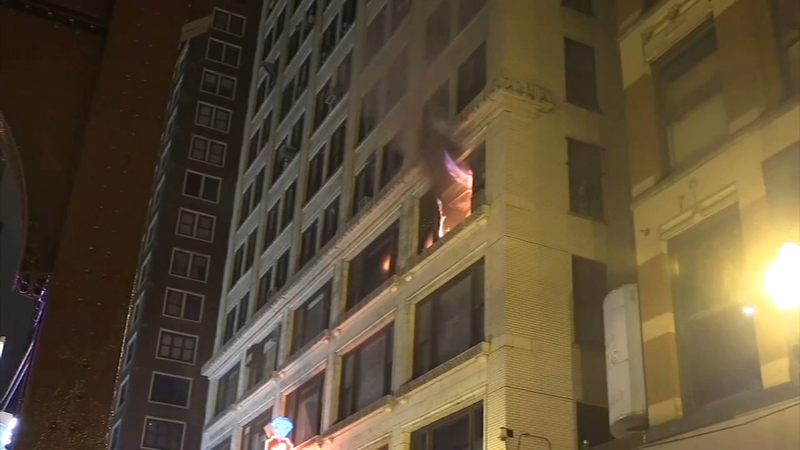 CHICAGO (WLS) -- Two firefighters were injured and others had to be rescued from a burning high-rise fire in the Loop Wednesday morning.

The extra-alarm fire broke out just before 2 a.m. in the Mallers Building on Jewelers Row at 5 South Wabash Ave., Chicago Fire Department officials said. It is a commercial building filled with jewelry manufacturers, diamond sellers and jewelry repair shops.

Two firefighters were injured and others had to be rescued from a burning high-rise fire in the Loop Wednesday morning.

Two men had to be rescued from this fire, officials said. They are ok and both of them said the smoke was overwhelming.

The two men were seen tapping on the window so they could be rescued. One of the men, Koko Deveci, was working late and said he smelled smoke on the fourth floor inside a business called European Jewelry down the hall. He went to check it out before the smoke filled the hallways and became overwhelming.

Two firefighters were injured, fire officials said. One has a minor leg injury and the other got overheated. Both of them were transported to a local hospital for treatment.

Wednesday morning, no one was being allowed inside the Maller's Building, home to more than 100 jewelry shops because the smoke, water and fire damage was too great. But people still came to work.

"My reaction right now is I, wanna go and work. Every hour we're not in there, we're losing money, so that's kinda what I'm focused on right now is trying to get back in there," said ilya Kunin, who works in the building.

The 21-story building on Jewelers Row was built in 1912 and is well-known for its jewelry repair, design and manufacturing shops. Workers say most of the office suites have dangerous equipment.

"Every single office in this building has a torch, has equipment that's flammable. We're all working with combustible things so, I'm not shocked. If it was going to happen anywhere in the city of Chicago, it would happen in this building," Kunin said.