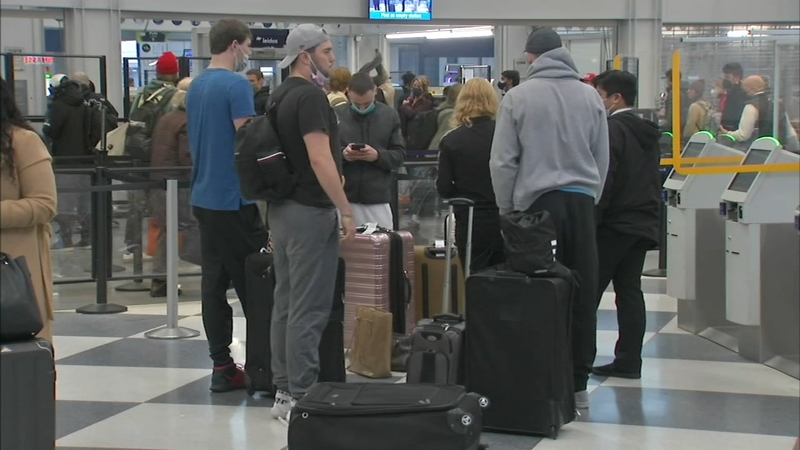 CHICAGO (WLS) -- Staffing issues blamed on COVID are making it complicated for air travelers over the holidays.

O'Hare Airport has been quite busy for the last week. According to Flight Aware, it's been the busiest airport in the country with nearly 12,000 arrivals in the last week.

According to FlightAware, about 60 flights have been impacted at O'Hare Monday morning and about 950 flights impacted across the country.

Michael Smith has been trying to fly into O'Hare from Seattle since Sunday. He's seen three of his Alaska Airline flights get canceled.

"First delay was just a regular canceled flight, didn't really say why," Smith said. "Second one, they said weather and the third one they're saying crew shortage due to them either not arriving Seattle or who knows really the real true reason."

According to FlightAware, roughly 5,000 flights have been delayed or canceled since Friday, with about 1,500 just Sunday alone. Some* people are luckily avoiding that chaos.

"Everything's been great," said traveler Liz Fromm. "We got here a little early because we thought it would be bad, but no, it's been flawless."

But even if someone's flight isn't delayed or canceled, they still have one worry on their mind: the spread of COVID, now being driven by the omicron variant.

"A little bit of concern catching it before our trip but other than that we feel pretty safe," said traveler Maddie Cowen.

Some travelers are hoping for some peace of mind with plans to get tested once they land.

"We have our booster shots and everything but yeah, definitely getting tested afterwards," Fromm said.