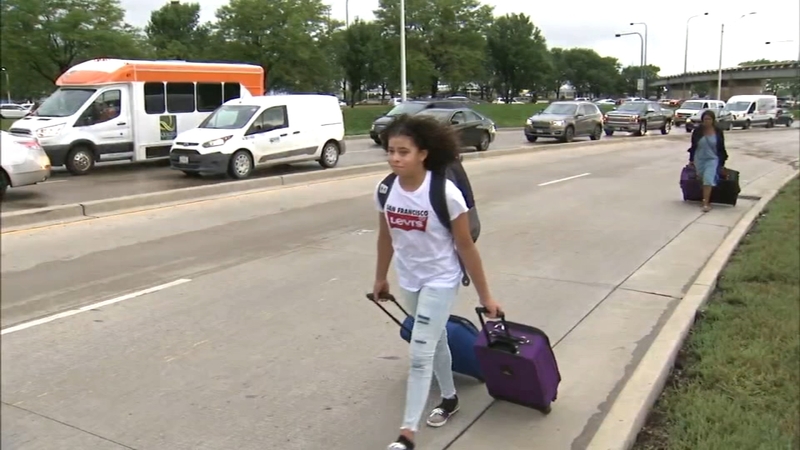 Taxi and Gate Hold delays of 30 to 45 minutes are also being reported at O'Hare due to storms.

There was also flooding inside O'Hare's Terminal 5.

"It was dripping through the light fixtures. It was pretty nuts," said Ryan Worthington, a traveler at O'Hare. "When we first got off they were using a Zamboni water machine to scoop it up, but it's probably of an inch thick through most of the area."

"Somehow it went through the concrete all the way through the floor," said Jordan Zakheil, a Smarte Carte employee.

Midway Airport reported average delays of 25 minutes or less and 4 cancellations as of 9:53 p.m.

Travelers like Matt Noone, desperate to make flights from Terminal 5, had only one choice.

"I was in an Uber for like an hour. He tried like four different access points and couldn't get in, so I just got out and walked," he said.

I-90 has since reopened but traffic remained slow because of standing water.

In north suburban Lake Forest, some cars were floating under Route 41. Floodwaters in the area stranded one woman, who was forced to abandon her car in chest-deep water.

According to the Lake County Sheriff, Route 45 is closed between Peterson Road and Route 137 in Libertyville. Metra and the Illinois Department of Transportation are assessing damage to a railroad bridge in the area.

Metra representatives said structural issues with the bridge may cause "extensive delays" for inbound and outbound trains.

"Passengers are being bused between Libertyville and Prairie Crossing until further notice," Metra said.

In North Chicago, fire crews had to rescue another woman who had become trapped under a viaduct.

The storms also brought lightning to the area. One resident in south suburban Darien said his house was struck by lightning while he and his family were inside. No one was hurt and there was no significant damage to the home.

The man's son, 13, ran for help but fell and injured his leg. The boy was able to get the attention of passersby, who called 911.

According to officials, the man did not have a pulse when he was pulled from the water, but paramedics were able to resuscitate him. Both he and his son were taken to the hospital.

Earlier Monday afternoon, a severe thunderstorm prompted a tornado warning for McHenry and Lake Counties. The warning was later canceled.