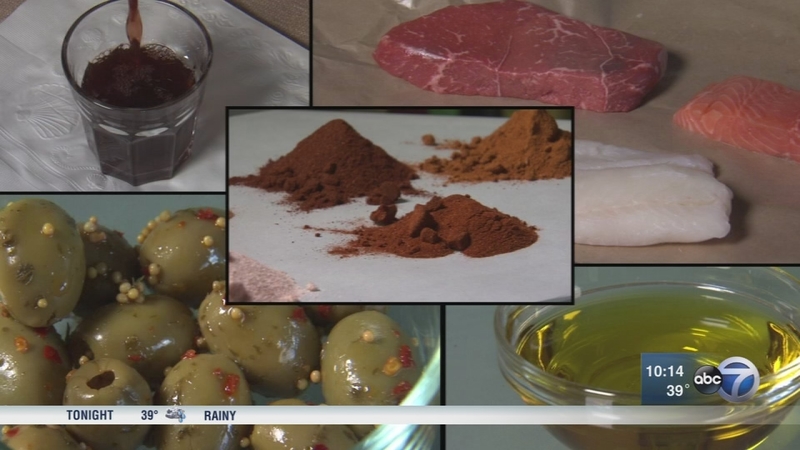 CHICAGO (WLS) -- There are protections in place to safeguard the U.S. food supply, but as with sham designer purses and knock-off watches, there are billions of dollars to be made with counterfeit cuisine.

Those counterfeit foods include milk, some cheeses and even expensive wine.

In June 2016, there was a massive seizure of counterfeit honey in the Chicago suburbs. Homeland Security Investigations and Customs and Border Protections seized 60 tons of fake honey, which is now stored in a government warehouse on the Texas/Mexico border. It was the largest food fraud investigation in U.S. history.

"It's a crime in which a lot of people have made a lot of money smuggling it into the United States," Special Agent Matthew Gauder, Homeland Security Investigations - Chicago.

The illegal honey was from China, some tainted with antibiotics prohibited in food. The lost revenue for taxpayers tallies in the hundreds of millions.

"Honey is not that innocent food we all like to think it is," Gauder said.

"It could be 10 percent of the entire U.S. food supply is fraudulent one way or another," said John Spink, Ph.D., director of the Food Fraud Initiative at Michigan State University.

Spink said the range of fraudsters is wide. Figuring out who's to blame can be difficult, but necessary.

"It's a crime of opportunity it's a crime that is complex so definitely organized crime is involved, but also some of those larger groups are affiliated with other types of crimes such as terrorism," he said.

Many food producers are now under assault by well-organized counterfeiters, costing the taxpayers billions and risking consumer health.

"We've cleaned up the industry a lot, but the schemes keep evolving," Gauder said.

The schemes continue to become more sophisticated, even the paperwork for purity is being faked.

"Something that is concerning for me as an investigator and for you as a consumer is that in recent shipments, including a seizure I made a few months ago, we're seeing fake and altered laboratory reports," he said.

Some popular targets according to USP, a scientific nonprofit, are olive oil diluted with cheaper inedible oils, spices such as paprika and chili powder mixed with cheaper materials or industrial dyes, honey mislabeled and spiked with corn syrup and possibly antibiotics, and seafood switched out for cheaper species.

"There's a good chance, Chuck, that if you order red snapper at a restaurant you are really getting tilapia. If you order tuna or cod, you are probably getting escolar," Gauder said.

Escolar is a fish that can cause stomach problems.

Food crime can also involve substitution and tampering with dangerous chemicals and ingredients that could make consumers sick. Finding the frauds can be difficult. It's a constant battle for investigators across the globe.

"It happens a significant amount in our industry, no question about it," he said.

Flom said reputable restaurants now have safeguards in place to guarantee what's on the menu is the real deal. That includes making personal visits to suppliers.

"It's very important who you partner with or who your marriages are within the food business, and that they are very strong. And so we spend a lot of time doing that and researching that," Flom said.

The penalties associated with being caught are small compared to drug trafficking.

"Organized criminals to include the Italian mafia have figured that out. These are crimes that are relatively low risk that come with a high reward," Gauder said.

The FDA said it continually monitors food producers for safety. The Grocery Manufacturers of America told the I-Team that product safety and integrity and maintaining consumer confidence are the most important goals of the industry.

Best practice is for consumers to buy less-processed food, buy local and skip foods priced too good to be true.

Tips to avoid food fraud, from the experts:

The Food Fraud Database is a powerful tool helping food manufacturers, suppliers and others identify fraud risks within their value chain. With such a broad set of capabilities, it can be difficult to explore all of the features in a short period of time.

Last spring GMA launched its own tool to help companies combat food fraud called EMAlert. It is a secure and intuitive web-based software tool that allows food manufacturers to rapidly analyze and understand their individual, company-specific EMA vulnerabilities in their manufacturing process. We partnered with the Batelle research group. Their approach for this platform focuses on predicting fraudulent tendencies similar to approaches used by Battelle for the U.S. Department of Homeland Security to predict terrorist tendencies and preferences.