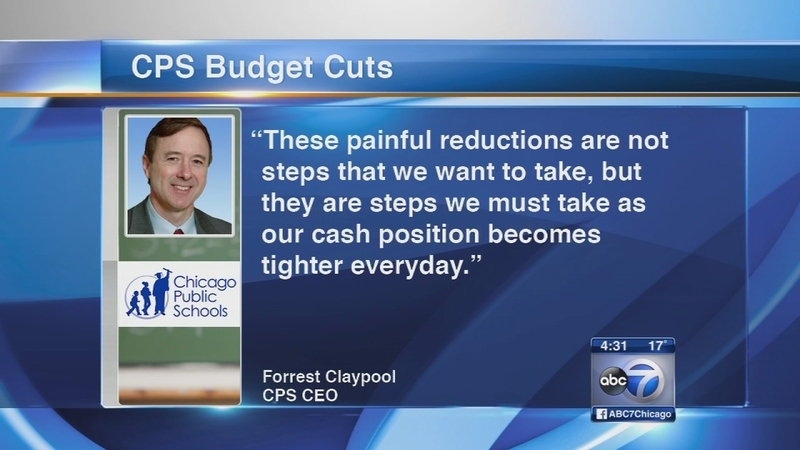 CHICAGO (WLS) -- Every Chicago Public Schools principal got bad news during Tuesday principal meetings, where they were told there would be mid-year cuts and to prepare for the worst.

Faced with a $1.1 billion budget deficit, no state money and a rejected Chicago Teachers Union contract, CPS took the unprecedented step of cutting school budgets by $120 million in the middle of a school year.

In a written statement, Claypool said "These painful reductions are not steps that we want to take, but they are steps we must take as our cash position becomes tighter every day."

A CPS spokeswoman said no schools saw more than 3.5 percent of its budget cut. Charter school adjusted budgets are expected to be released on Wednesday. The average budget cut for all schools is 1.5 percent.

At least one principal said the cuts were not as bad as expected.

However, Principal Dennis Sweeney is taking a $50,000 hit, which he said is almost a 2-percent cut from his school budget.

"It's a substantial cut," Sweeney said. "I may be able to do it without reducing staff. I have to look at my budget."

Principals have the discretion to decide what to cut and each principal will have to cut different amounts because of per-pupil funding. CPS has directed principals to do everything possible to prevent teacher layoffs.

"There are funds for professional development that I might cut and we'll do more of it ourselves," Sweeney said.

Maurice Swinney, of Tilden Elementary, said: "This is a time when we'll reach out to the community and say, 'Hey, how can we use other funding sources? How can you all help us to build programs around kids?"

Some alderman are pushing to use surplus tax increment financing (TIF) money to bail out the schools.

"We've got to figure out a way to move as many of those dollars as possible to help our Chicago public schools," said Ald. Carlos Ramirez-Rosa (35th Ward).

CPS is not counting on surplus TIF money, but the district has received some federal funding for schools with students from low-income families.