Chinese restaurants providing free meals for front line workers: 'We should take care of them' 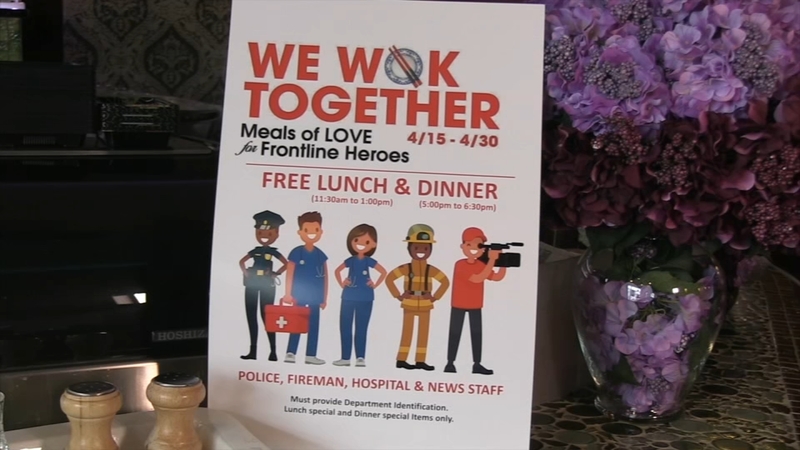 CHICAGO (WLS) -- The U.S.-China Restaurant Alliance is a consortium of restaurants in Chicago, New York, Los Angeles, and even Kalamazoo.

They're struggling to stay afloat during the pandemic, but just this week, began an initiative to feed not just COVID-19 ER workers, but also police, firemen, even media working the front lines.

Chinatown is more like a ghost town these days. On a recent lunch hour, nearly every business in the Chinatown Square Mall was shuttered, save for a handful doing takeout or delivery.

"Kind of slow and nobody's come here," said Ming Liu, the manager at Tous les Jours, an Asian bakery that just re-opened this week with a third of the normal staff. His shelves are half-full, as is the pastry case, with just a few walk-ins.

A few yards away, Lao Sze Chuan - which has five locations in the region - has a reduced staff but appears quite busy. The reason? They're cooking almost exclusively for first responders.

"We want to serve the community," said Tony Hu, the owner of Lao Sze Chuan and is the chairman of the U.S.-China Restaurant Alliance. He said business in the area is down about 80 percent. Despite the hardship, he said it's important to feed the community that helped him be successful.

"A lot of people come to us for help," Hu explained. "We start to try to offer people free lunch and dinner because they're working the front lines, and they're serving the community and we should take care of them."

They've launched "We Wok Together" - a program offering free lunch and dinner to anyone working the front-lines, including police, firemen, healthcare workers, even media - not because they got a grant, but because they say it's the right thing to do. The hurdles are much more than just financial.

A mile away, in a Bridgeport strip mall near Sox Park, Chinese Kitchen and Sushi has felt the same blow to its business, but as a member of the Alliance with three restaurants of their own to worry about, they will also be providing free lunches and dinners every day, from each of their locations, as long as the lockdown is in force.

You can certainly help these restaurants carry out their mission if you like, donations are always accepted. There are 18 of the restaurants in our area offering these free meals to front line workers.