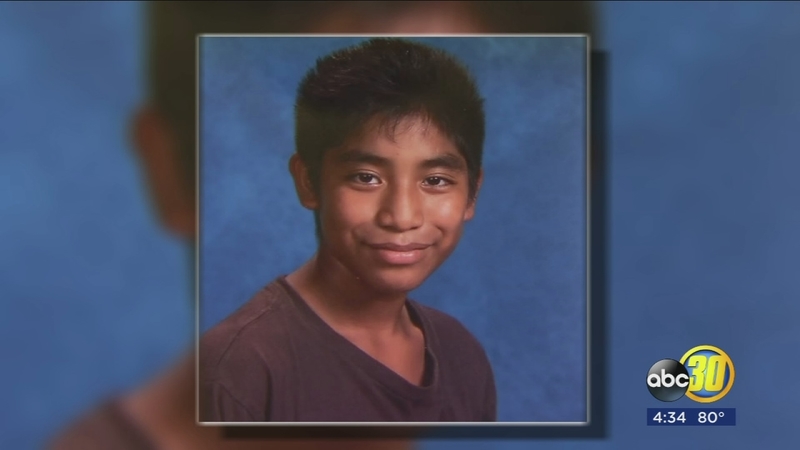 FRESNO, Calif. -- A special delivery Monday brought a treasure to help a mother deal with tragedy. The school community and strangers are supporting the Fresno woman whose son was electrocuted because of exposed wires at his apartment complex.

Victoria Antunez has a long road ahead to deal with the grief of losing her oldest child, her 12-year-old boy Adrian and her best friend. But based on a gesture Monday, she will not walk that road alone.

From the hands of children, messages of love mourn the loss of Adrian Antunez near the apartment where his mother still lives.

She did not know so many people had so much love for her son, and a lot of them are helping her mourn.

Gaston-Gehris was Adrian's vice principal at Scandinavian Middle School. She and her mom collected donations and made a special delivery Monday. Hundreds of dollars in cash, gift cards to buy Adrian's funeral clothes, and a memory Victoria Antunez will embrace for the rest of her life.

"Lifetouch donated a package of photos for you, and I framed this one for you so you'll have it," Gaston-Gehris told Victoria.

"Thank you," the grieving mother replied.

She clutched her son's last school photo, a picture she might never have seen since she didn't pay for any prints. But seeing her son's face, and feeling the support from the people he touched lifted her spirits.

"That kind of gives me a little bit of strength to stay up and keep going," she said.

Antunez plans to pursue a lawsuit against the apartment complex. Fresno code enforcement officers say illegal wiring energized the fence where Adrian got stuck and died. And she has a funeral to attend this weekend.

But she now knows her son's impact on the world means she will have help along the way.

"And we're still there for you, OK?" Gaston-Gehris told her in between hugs.

There is a pretty emotional story behind some of the donations too. One of them almost involved a traffic ticket, but showed the softer side of Clovis police instead.

Gaston-Gehris says she made a rolling stop at Shaw and Clovis on her way to Kohl's to buy Adrian some clothes to wear at his funeral. She got pulled over and when the officer came to her window, the emotions just poured out of her.

"It kind of all hit her right in front of me, so I did what anybody else would've done," said Cpl. Richard Ashcraft of the Clovis Police Department. "I pulled out my wallet. I took the money I had in my wallet. I gave it to her and asked her to put this towards the fund. I told her I wanted to issue her a warning on the traffic violation."

Ashcraft got back to the office, emailed his entire department, and took up a collection to help the Antunez family.