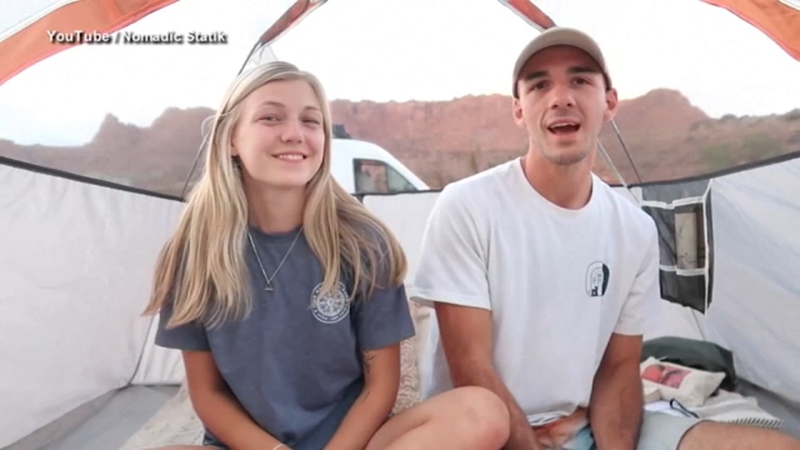 NORTH PORT, Fla. -- Brian Laundrie flew home to Florida in the middle of his cross-country trip with his girlfriend, Gabby Petito, the 22-year-old woman who went missing during the trip and who authorities confirmed as the body discovered in the Bridger-Teton National Forest in Wyoming.

A massive search is continuing around North Port, Florida, for 23-year-old Laundrie, where investigators said Laundrie returned to his home on Sept. 1 without Petito but driving her 2012 Ford Transit. Laundrie has been named by police as a "person of interest" in Petito's disappearance.

An attorney for the family of Laundrie confirmed to ABC News on Tuesday that the wanted fugitive flew home to Florida from Salt Lake City on Aug. 17 and flew back to Utah six days later to rejoin Petito.

Steven Bertolino said Laundrie flew home to "obtain some items and empty and close the [couple's] storage unit to save money as they contemplated extending the road trip." Bertolino said the couple paid for the flights together as they were sharing expenses.

Laundrie's trip back to the Tampa area came five days after he and Petito were stopped by police in Moab, Utah, when witnesses reported the couple was engaged in a domestic violence incident in Moab.

Bertolino also confirmed to ABC News that the family now believes Laundrie left to hike the Carlton Reserve on Monday, Sept. 13. Previously, they had told investigators he left on Tuesday, Sept. 14.

"The Laundries were basing the date Brian left on their recollection of certain events. Upon further communication with the FBI and confirmation of the Mustang being at the Laundrie residence on Wednesday, September 15, we now believe the day Brian left to hike in the preserve was Monday September 13," Bertolino said.

Laundrie has refused to speak to the police and has not been seen since Tuesday, Sept. 14, according to law enforcement officials.

The search for Laundrie is the latest twist in the case that has grabbed national attention as he and Petito had been traveling across the country since June, documenting the trip on social media.

Petito's parents, who live in Long Island, New York, reported her missing on Sept. 11 after not hearing from her for two weeks.

Brian Laundrie's sister pleads for him to surrender to police

Brian Laundrie's sister, Cassie, spoke out exclusively to ABC News in the wake of her brother's disappearance following the death of his fiancée Gabby Petito.

Cassie Laundrie said she has a message for her missing brother, who has been the center of a nationwide manhunt after the body of his girlfriend, Gabrielle "Gabby" Petito, was found in Wyoming last month.

"I would tell my brother to just come forward and get us out of this horrible mess," Cassie Laundrie told ABC News in an interview that aired Tuesday on "Good Morning America."

Cassie Laundrie, who lives in Florida with her husband and two sons, told ABC News that her brother and parents stopped by for an "ordinary" visit the day he returned.

"I really wish he had come to me first that day with the van," she said, "because I don't think we'd be here."

Cassie Laundrie told ABC News that she does not know where her brother is and if she did, she would "turn him in." She said the last time she saw or heard from him was on Sept. 6, when their family went to Fort De Soto Park in Florida's Pinellas County.

"We just went for a couple of hours and we ate dinner and had s'mores around the campfire and left, and there was nothing peculiar about it," she said. "There was no feeling of grand goodbye. There was no nothing."

"I'm frustrated that, in hindsight, I didn't pick up on anything," she added. "It was just a regular visit."

She said it's unusual for her brother to disappear for this long.

"I hope he's OK, and then I'm angry and I don't know what to think," she said. "I hope my brother is alive because I want answers just as much as everybody else."

She said she has been cooperating with authorities "since day one," and she called on her parents to do the same.

"I don't know if my parents are involved," she said. "I think if they are, then they should come clean."

While she remains concerned for her brother, Cassie Laundrie said she is also mourning for Petito and wants the Petito family to know that her heart is with them.

"They deserve answers," she said.

In this footage, Petito describes Laundrie grabbing and unintentionally scratching her face after she initially hit him.

When asked if Laundrie hit her, she responded, "I guess, I guess yeah," adding, "but I hit him first."

"Where did he hit you? Don't worry, just be honest," the officer asked.

She responded by grabbing her own face.

"He grabbed my face, I guess. He didn't like hit me in the face, like he didn't punch me in the face or anything," she said making a punching motion.

"Did he slap your face or what?" the cop asked.

"Well he like grabbed me with his nail, which I guess is why I have a cut right here I can feel it, when I touch it it burns," she responded.

Petito said that she and Laundrie got into a fight in which he got frustrated and locked her out of the car to take a "breather." She said she wanted to get going because they were out of water.

The footage also showed the same police officer on the phone with a witness who saw Petito and Laundrie allegedly fight at a grocery store.

The witness reiterated multiple times that something seemed very "off" to him.