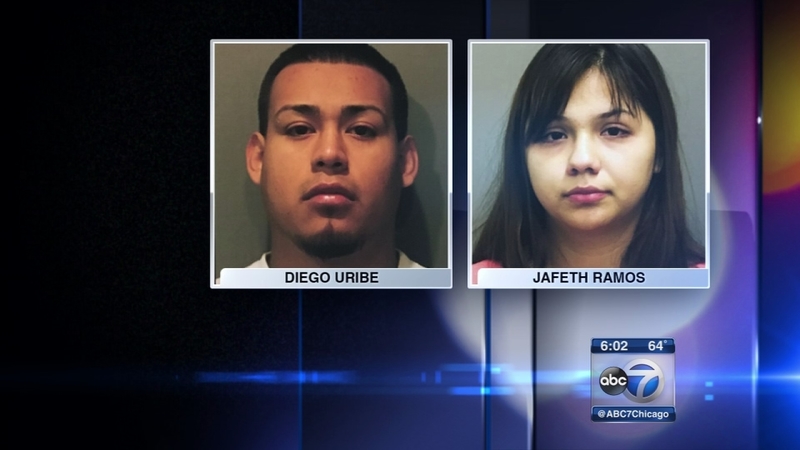 CHICAGO (WLS) -- A judge denied bail for a man and his girlfriend charged in connection with the murder of six family members in their Gage Park home in February.

Diego Uribe-Cruz, 22, who is related to the family, and Jafeth Ramos, 19, face six counts of first-degree murder, Chicago Police Supt. Eddie Johnson announced Thursday. The couple was arrested Wednesday night at their Little Village home where they were raising their infant son.

Police say both gave recorded confessions. At the bond hearing, the judge said the slaughter of the Martinez family "can only be described with two words: pure evil."

Police said Uribe killed 32-year-old Martinez first, during the argument, by shooting her four times in the head. Maria's brother, Noe Martinez Jr., 38, was the second victim. He was beaten when he came to his sister's aid. Police said Uribe then systematically murdered the other four family members: Noe Martinez Sr., 62, who was stabbed more than 40 times; his wife, Rossaura Martinez, 58, and their grandchildren Leonardo Cruz, 13, and Alexis Cruz, 10. All the victims, including the boys, had defensive wounds.

After killing Noe Jr., police say Uribe pushed Rossaura Martinez down the stairs, stabbed her, and then stabbed Maria Martinez's two young sons - his cousins. First, he killed 10-year-old Alexis. Uribe told prosecutors he "...got (him) there with the same knife that I got the grandma."

According to prosecutors, young victim Leonardo Cruz begged for his life saying, "Please no! Please don't! I just want to live!"

Alvarez said before he was killed, Ramos made Leonardo hold a bag to help them steal items. Then Uribe told the teen to watch out the window for his grandfather, and killed him. Later, his grandfather returned with tamales and hot chocolate when he was killed.

Prosecutors say Noe Sr. questioned Uribe's motive as he was attacked, saying, "Why are you killing me, I don't owe you anything."

Police say that during the course of the investigation, they asked family members for DNA samples. Uribe consented to a DNA test, and police say that helped discover that he was a suspect.

From the beginning, police described the case as a complex investigation. It was believed that the family had been specifically targeted and that this was not a random crime.

Police found the doors of the house locked. There were no signs of forced entry. The home was not ransacked and none of the victims was bound.