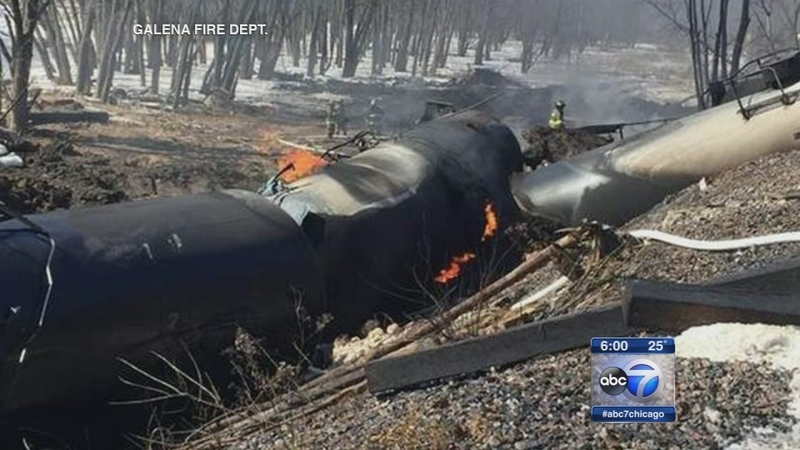 Oil tanker that derailed near Galena was headed for Chicago

GALENA, Ill. (WLS) -- After the derailment in Galena, the ABC7 I-Team looked at the dangers posed to Chicago and to areas all over the country by railcars filled with crude oil.

Officially, they're railroad tank cars, but after three fiery derailments in three weeks, some have taken to call them "oil bomb trains."

New information from federal authorities is that 25 million Americans live within the 1-mile evacuation zone that straddles tracks used by crude oil rail lines. Dozens of the tanker trains crisscross metro Chicago each week, and the one that derailed in western Illinois was headed this way.

Two of the freight cars are still on fire. They're among the 21 crude oil tankers on the train that derailed Thursday just south of Galena. Several of them ruptured and split open, then blew up.

"It is a great concern. People in the past, have brought this up to our attention, for the closeness of the railroad tracks with our buildings, our public, and our roadways down there," Galena Mayor Terry Renner said.

The 105-car Burlington Northern Sante Fe train was headed toward Chicago at the time of the accident. One couple - expecting their first child - didn't wait to be evacuated. They moved into a hotel.

"If they're concerned enough that they're telling people of the toxicity of the flames are making normal people have to leave. I just worry what it's going to do to the baby," said John Hermsen, a Galena resident.

At least 32 crude oil trains roll each week across Illinois, through several collar counties and Chicago. On Friday afternoon, the I-Team spotted oil trains against the Chicago skyline.

Most troubling for federal regulators is the tankers that have split open in these recent accidents are newly retrofitted with protective shields that are supposed to prevent rupturing.

"We are collecting what we are calling SUMA canisters. These canisters run for 24 hours and we're going to use these to analyze the particulates in the air from the fire," said Jaime Brown, U.S. Environmental Protection Agency.

The oil, primarily from the Bakken region of North Dakota, is light crude - which is more explosive, more toxic, and can penetrate soil. Federal authorities say they have dammed off nearby Galena and Mississippi rivers from the oozing crude.

Waterway contamination is an ongoing threat as crude oil production and shipments increase. Records show that oil trains routinely pass within a quarter-mile of protected wetlands, drinking water reservoirs and other waterways, including the Chicago River and Lake Michigan.